Bozeman and Billings, MT –The Custer and Gallatin National Forests currently has one new confirmed start as of noon on Friday, August 16 on the Yellowstone Ranger District.  The North Eightmile Fire currently has 1 helicopter and 8 smokejumpers on scene.  This fire is visible south of Bozeman and is burning in timber with mixed beetle killed trees.  Additional resources have been ordered including 1 Tanker and 2 single engine air tankers.  No structures threatened.

The Emigrant, Horsetail and Sheep Fires have kicked up a little smoke today as well that people may see and air and ground resources are being utilized on those fires based on current tactics for each.  More information can be found at: http://inciweb.nwcg.gov/

‘Drive Sober or Get Pulled Over’ Campaign Will Target Drunk Drivers

[Bozeman, Gallatin County, Montana] – From mid-August through Labor Day, local law enforcement will be out in force as part of the annual nationwide “Drive Sober or Get Pulled Over” crackdown on drunk driving.   The crackdown, which will include high-visibility enforcement throughout Gallatin County will run from August 16 through September 2, 2013.

The effective nationwide drunk driving crackdown will include high-visibility enforcement, high-profile events, and will be supported by national paid advertising, creating a comprehensive campaign to curb drunk driving in August and through the Labor Day holiday weekend.

Gallatin County Sheriff Gootkin and Bozeman Police Department Patrol Captain McManis said their deputies and officers will be aggressively looking for drunk drivers during the crackdown and will arrest anyone caught driving drunk.

Although it is illegal in all 50 States, the District of Columbia and Puerto Rico to drive drunk (having a blood alcohol concentration of .08 or higher), far too many people across the nation get behind the wheel after consuming too much alcohol.  The latest statistics from the National Highway Traffic Safety Administration underscore the serious nature of the nation’s continuing drunk driving epidemic.

“Every year, about one third of all motor vehicle traffic deaths involve one or more drunk drivers or motorcycle operators,” said  Sheriff Gootkin.  “In 2011 9,878 people died in crashes involving drunk drivers.  That works out to approximately one drunk driving fatality every 53 minutes.”

Captain McManis added that holidays such as the Labor Day holiday are particularly dangerous.

During the Labor Day weekend in 2011, a total of 138 people were killed in motor vehicle traffic crashes involving drivers or motorcycle riders with BACs of .08 g/dL or higher.  Of those fatalities, 83 percent occurred during early evening and overnight, from 6 p.m. to 5:59 a.m.

“Research has shown that high-visibility enforcement like the ‘Drive Sober or Get Pulled Over’ campaign reduces drunk driving fatalities by as much as 20 percent.  By joining this nationwide effort, we will make Bozeman and Gallatin County’s roadways safer for everyone throughout the Labor Day period,” said Captain McManis.

“We want to remind everyone that getting behind the wheel drunk is a terrible idea.  Unfortunately, not only does drinking impair your ability to operate a vehicle safely, it also impairs your judgment and good sense about whether you can, or should drive.  If you have any doubt about your sobriety, do not get behind the wheel.  If you do chose to drive impaired, you will be arrested.  No warnings. No excuses,” Sheriff Gootkin said.

“Driving drunk is simply not worth the risk. So don’t take the chance. Remember, we will be out in force and we will be watching, so ‘Drive Sober or Get Pulled Over,’” said Captain McManis.

For more information, visit the “Drive Sober or Get Pulled Over” Campaign Headquarters at www.TrafficSafetyMarketing.gov.

The Gallatin County Sheriff’s Office is proud to announce that the Three Forks City Council voted unanimously last night to contract with the Sheriff’s Office for law enforcement services.  The vote is contingent on contractual language and set to begin on September 1st.

12:19 am August 13, 2013 – The Rae and Sourdough Fire Departments are currently assigned to a significant commercial structure fire at 1580 Bobcat Drive. The call was received at 9:30PM. First responders encountered heavy fire upon arrival and due to significant safety concerns began to extinguish the fire from the exterior of the building.

A staffing and coverage plan is in place to address any other calls that may occur in the county as many of the resources in the surrounding area are committed to this event.

At this time the cause of the fire is unknown and will be under investigation once the fire is extinguished.

Further updates will be released as conditions change.

At approximately 11:30 AM a small passenger plane crashed at the West Yellowstone Airport. Sheriff’s Deputies, the Hebgen Basin Rural Fire Department and Forest Service personnel  responded to the scene. One male is deceased and another male was flown to Idaho Falls and is in critical condition. The Sheriff’s Office will assist the NTSB on the investigation when they arrive on scene.  The identities of the occupants of the aircraft are not availalbe at this time.

The Sheriff’s Office has recently received several reports of homemade tire spiking devices found on the roadways in the Landmark Subdivision. On at least two occasions a motorist has run over the spikes resulting in deflated vehicle tires.  If you have any information relating to these spikes or knowledge of who may be responsible for leaving them in the roadways, please contact the Gallatin County Sheriff’s Office at 582-2100, ext. 2, or
Crimestoppers at 586-1131.  The photo below is an example of one of the homemade spikes recovered from Landmark. 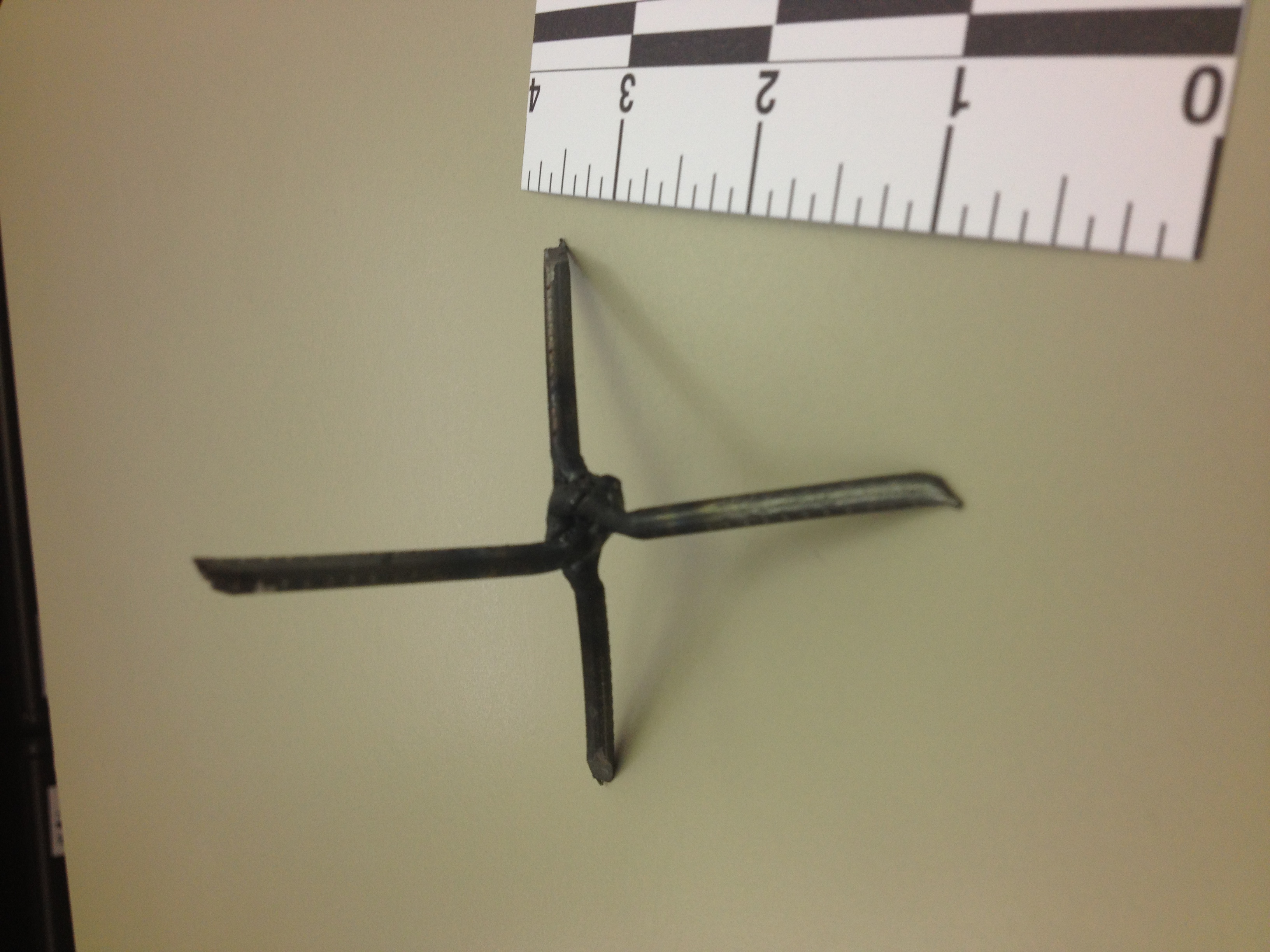 The Gallatin County Sheriff’s Office in conjunction with the Montana Department of Health and Human Services is currently hosting a statewide Crisis Intervention Team (CIT) training. This training focuses on “training the trainer”. Major Sam Cochrane (ret) of the Memphis Police Department and the founder of CIT is conducting the training. We are honored to have Major Cochrane and his team of highly effective trainers here in Montana allowing us the opportunity to share CIT with other communities throughout the state.

If any news outlet is interested in an interview with Major Cochrane and/or other participants of the training, please arrive at the Gallatin County Detention Center on August 7th, at 0845 hours. Major Cochrane will also be giving a presentation to community members and mental health professionals tonight at 6:30 pm at the Gallatin County Courthouse

The rescue team transported the injured 54-year-old male from the backcountry to an awaiting Big Sky Fire Department ambulance. The patient who was from Bismarck, North Dakota, had suffered a pelvic injury from the mountain biking accident. He was transported to the Bozeman Deaconess Hospital. ######