The Gallatin County Sheriff’s Office is presenting its third Public Safety Academy.  This academy will be 10 weeks in length and will occur on every Thursday evening from 6pm-9pm.  It is set to begin on Thursday, April 2, 2015 and end on June 4, 2015.

The academy is open to any adult that is interested in the various aspects of law enforcement.  Some of the topics include 911 communications, Search and Rescue, Patrol work, Special Response team, Detective work, EMS, Fire Service, Drug Task Force and Detention Center information.  The student will get a chance to learn, participate and see demonstrations on these topics as well as numerous others.

For more information or to register for the class please contact Lt. Shane Frantz at 582-2120 or by email at shane.frantz@gallatin.mt.gov   Class size is limited.

(West Yellowstone, Mont.) Tuesday March 10, at approximately 4:30 p.m., Sheriff’s Search and Rescue units in West Yellowstone responded to an injured snowmobiler approximately 1.3 miles south of Lionshead Mountain near the Idaho/Montana border. A 47 year old female from White Lake Michigan suffered severe head, neck and shoulder injuries when her snowmobile struck a tree at a high rate of speed. Team members responded on snowmobiles guided by a member of her party. She was quickly packaged and carried by hand to a waiting Lifelight Network helicopter from Rexburg Idaho. The female was flown to Eastern Idaho Regional Medical Center in Idaho Falls where a type one trauma team was waiting.

Sheriff Gootkin would like to remind everyone that the key to safe snowmobile operation is knowing the machine, knowing your limitations, and using good judgment. Your speed should allow you to safely respond to sudden maneuvers by other snowmobilers and changing trail conditions.###. Photos courtesy of Gallatin County SAR 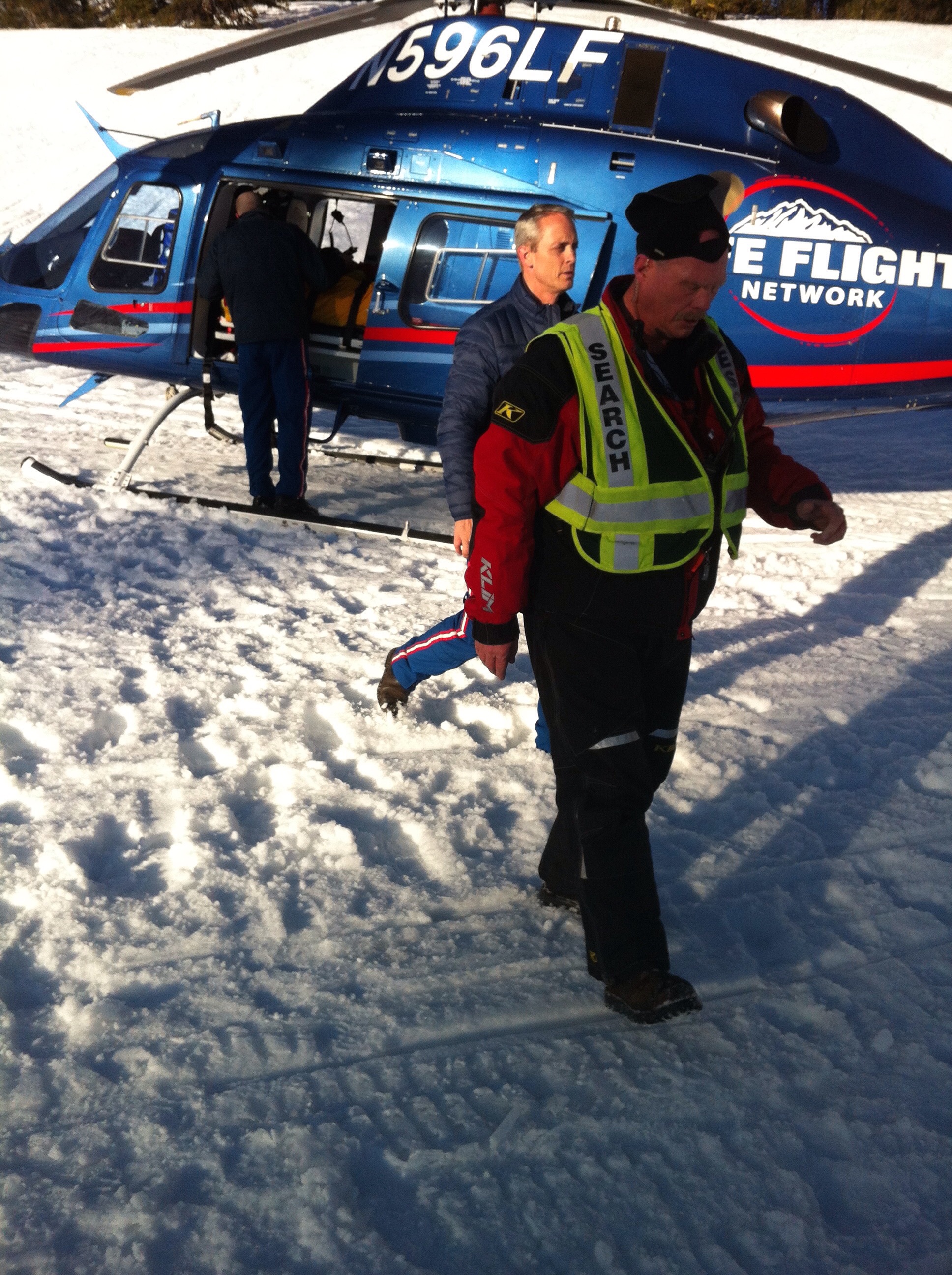 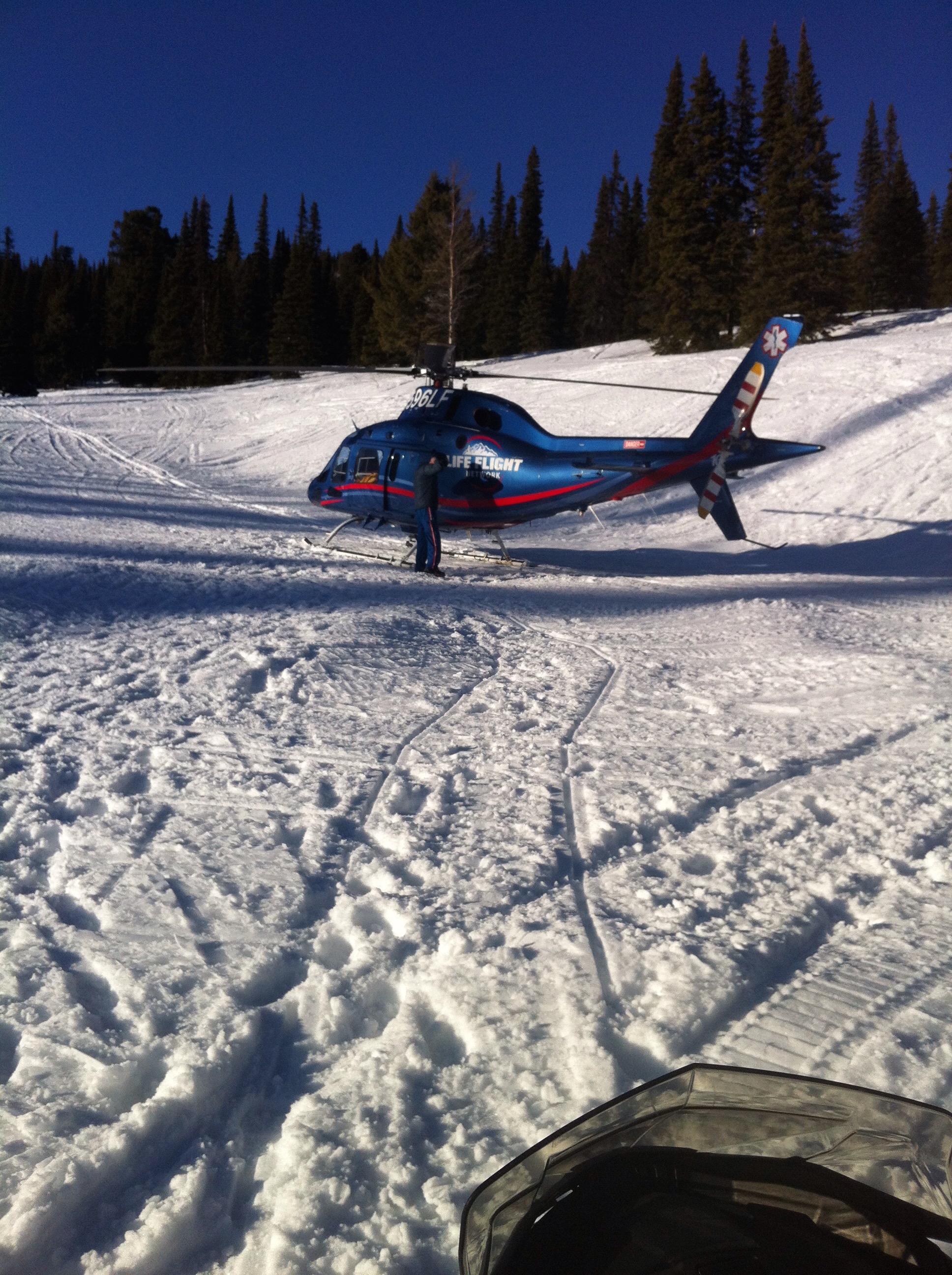 (Gallatin County, Mont.)  The Sheriff’s Office had been made aware that a company may be soliciting funds for Search and Rescue over the phone.  Gallatin County SAR does not and will not ever solicit money from the public over the phone.  There is no need to report the calls to Law Enforcement.  The company uses clever language to skirt the law and are not technically in violation of any statute.

(Bozeman, Mont.) Sunday Night March 8th, around 6:13 pm, the Gallatin County Dispatch Center was notified of a 47 year old Bozeman man needing assistance on a closed forest service road in the Hyalite Canyon area.  He had been hiking from the South Cottonwood Trailhead into the Hyalite area when he ran into difficult snow conditions.  He found himself having to “post hole” every step to walk through the snow.  He became extremely fatigued, nearly ran out of water, and was quickly becoming hypothermic.  Oncoming darkness was also a factor.  The male had an emergency beacon that he activated to summon help.  The male was able to communicate with the emergency beacon company via text message, who then relayed the information to rescue personnel.

Rescuers from Sheriff’s Search and Rescue responded to the Langohr Trailhead in Hyalite Canyon.  Using snowmobiles they quickly located him with the help of the accurate coordinates given by his emergency beacon.  He was treated for being extremely cold, packaged in a specialized rescue sled, and transported to the trailhead.

Sheriff Gootkin would like to point out that this is a good example of not waiting too long to make a call for help.  He said “It is much better for the rescue volunteers to come get you in the daylight than to wait until you are in serious trouble at midnight.”  He added “it may be your ego that gets bruised but it saves your mom and our rescuers unneeded worry and work.”

Monday about 2 p.m., Sheriff’s Search and Rescue in West Yellowstone received a cell phone call from skiers indicating that the 22 year old female had fallen and possibly suffered a broken ankle. Deputies responded to the injured skier’s location on the Rendezvous Ski Trail system and promptly escorted her via two place snowmobile, to the Hebgen Basin Fire Department for a preliminary evaluation.

Sheriff Gootkin would like to remind everyone that the warm spring temperatures can result in ice covered snowpack that is extremely hard and unforgiving. Remember to be prepared as an injury even during a short excursion, can result in prolonged exposure to the elements.

(West Yellowstone, Mont.) A 46 year old man from Billings Montana suffered shoulder, arm and wrist injuries when his snowmobile left the trail on a sharp turn and struck a tree.

Saturday about 11 p.m., Sheriff’s Search and Rescue in West Yellowstone and Forest Service Personnel responded to a report of an injured snowmobiler on the Two Top trail. The snowmobilers were able to provide their general location while dispatch retrieved GPS coordinates from the 911 call.

Rescuers responded to the injured snowmobiler’s location, secured the injured arm, and quickly packaged him onto rescue sled. The team then met up with a waiting Hebgen Basin Fire Department Ambulance which transported him to Bozeman Deaconess Hospital.

Sheriff Gootkin would like to remind everyone that the key to safe operation is knowing the machine, knowing your limitations, and using good judgment. Your speed should be slow enough to be able to safely respond to changing trail or terrain conditions, and should be reduced when visibility is poor or you are unfamiliar with the area.

Copies of today’s presentations from the Media Flood Training Workshop are available below:

Reporters, Join Us for Flood Training This Morning

Bozeman, MT – All local reporters are invited to join local officials this morning for our Media Flood Training Workshop at 10:00 am.  This workshop is being held exclusively for reporters to talk about flooding before it occurs, so we are all on the same page when it does occur.

(Gallatin County, Mont.) On Saturday, February 28, 2015, at 8:56 PM, Sheriff’s Search and Rescue was dispatched for a backcountry search in Hyalite Canyon.  Dispatch had received a 911 call from two men who had gotten lost in the area of History Rock Trail, and were overtaken by nightfall without flashlights or headlamps.  They reported that they were on some sort of logging road or cross country ski trail.  Precise location data was not available from the 911 call, and dispatchers could only identify the cell tower which carried it.  Sheriff’s Search and Rescue volunteers responded to the area, with several riding in on snowmobiles via the Langohr Road.  Though hampered by marginal cell coverage where the lost parties were, sheriff’s deputies coordinating the search were able to make occasional phone contact with them.  This allowed the lost parties to inform deputies when they heard searchers’ snowmobiles, and to give the relative direction of the sound from their location.  The snowmobilers were able to find the men quickly, making contact with them at about 10:30 PM.  The men were cold, but uninjured, and no medical treatment was needed.  They were delivered back to their vehicle, and SAR volunteers ensured that they made it safely out of the canyon and onto the main road.

The men, one in his mid-thirties, the other in his early forties, told deputies they were visiting from out of state.  They had departed from the History Rock Trailhead on snowshoes around noon, and at about 4:00 PM arrived at a meadow where they made a couple of snowboard runs.  Shortly after 5:00 PM, they started back down to the trailhead, but somewhere along the way, they strayed off course and found themselves on a logging road.  After darkness fell, they found themselves lost, without lights, and getting cold, so the decision was made to call 911.  Fortunately, the only “injuries” suffered by the two were slightly bruised egos.  Both were very gracious in expressing thanks to the volunteers who came to their aid.

To all those who are lucky enough to enjoy Gallatin County’s boundless opportunities for outdoor recreation: Sheriff Gootkin asks that you learn from the experiences of others, because small mistakes sometimes have disproportionately large consequences.  Fortunately this particular call had a good outcome.  Regardless of the season or activity, be prepared for more than you intend to take on.  Always plan for the unexpected overnight stay, bad weather, twisted ankle, etc.  Sheriff’s Search and Rescue volunteers have had the pleasure of many late-night meetings with folks who were “just out for a day trip”.  So stack the odds in your favor by preparing, but if that fails making the call for help early usually makes it easier on you and our volunteers. #####