On Tuesday, March 2, 2021 at 3:31 pm, the West Yellowstone Police Department Dispatch Center received a request for assistance from a group of snowmobilers in Cabin Creek, 11 miles North of West Yellowstone. One of the snowmobilers had sustained a broken leg while snowmobiling and was unable to ride their snowmobile back to town.

Volunteers from Gallatin County Sheriff Search and Rescue in West Yellowstone, Custer Gallatin National Forest, Hebgen Basin Rural Fire District and a helicopter from Life Flight Network responded to assist with the rescue. While enroute to the incident, rescuers were met by the group, including the injured snowmobiler who was riding out after having stabilized the severe break with a shovel and tape. Rescuers assisted the group out to the trailhead where the injured snowmobiler was transported to Bozeman Health Deaconess by the waiting ambulance. 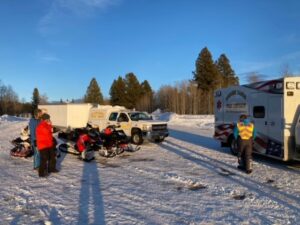