Next week, the Gallatin County Commission will consider an agreement that settles years-old litigation between the county and the state surrounding portions of Bear Canyon Road.

If the commission votes to approve the proposed settlement, a roughly 1.5-mile stretch of Bear Canyon Road can be formalized as a county road.

The settlement proposes that the county’s claims against the state be dismissed with prejudice, and that no monetary damages be paid by either party, and that each party pay their own attorney fees and court costs.

“This is a resolution that recognizes and legally formalizes the county’s interest in Bear Canyon Road,” said Chris Gray, the attorney representing Gallatin County in the case.

Commissioners will consider approving the proposed settlement agreement at their public meeting on Tuesday, Feb. 19 at 9 a.m. at the Gallatin County Courthouse.

The settlement would resolve a lawsuit Gallatin County filed against the Montana Department of Resource and Conservation in 2012 in Gallatin County District Court, in which the county sought recognition that a portion of Bear Canyon Road was a county road as well as damages for trespass.

The dispute began in 2007 when the county learned that the U.S. Forest Service and the state had obliterated Bear Canyon Road where it enters state land. In the effort to reroute the Forest Service trail in the area, the state and federal governments made portions of the road near Bear Creek impassible for some recreational users and claimed the county never had any interest or jurisdiction.  The county never gave up on its claims for the road from the mouth of Bear Canyon all the way to the intersection of the Park County line and eventually filed suit.

Gallatin County remains in litigation with the United States government, which it also sued in 2012 over another section of Bear Canyon Road. That federal case has been stayed on the condition that the state case is resolved. Negotiations in the federal case will continue. 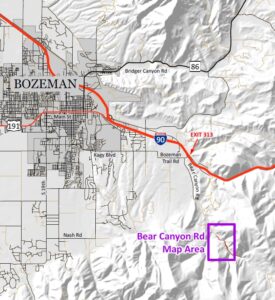 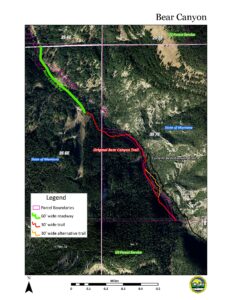