(Gallatin County, Mont.)  Friday at 3:20 pm., the West Yellowstone Police Department Dispatch center received a 911 call reporting a snowmobile crash on the South Plateau Trail approximately 3 miles southwest of the Town of West Yellowstone. The injured party, a 61-year-old man from Massachusetts, sustained a rib injury when the snowmobile he was riding on left the trail and crashed into a tree.

Rescuers met the injured party at the scene of the crash approximately thirty minutes after the initial call for help.  After an initial assessment of his injuries, rescuers made a determination to land a medical helicopter on the trail to fly the patient to Bozeman Health Hospital.  Due to the severe impact to the chest cavity and the pre-existing heart issue, rescue personnel decided to transport to a hospital in the quickest means possible. 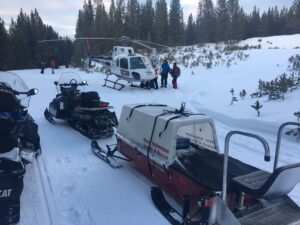 Eustis Fire and the Clarkston Community