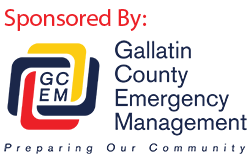 (Gallatin County, Mont.) Monday afternoon at 3:30 a wild-land fire was reported in the Clarkston South of Pole Gulch Road.  First responding units found a fire burning in timber, grass and brush threatening homes.  Sheriff’s Deputies responded and contacted residents that were in the fire’s path.  Most every fire department in the valley sent resources including aircraft and smoke jumpers from the Department of Natural Resources and Conservation & the U.S. Forest Service.  Deputies remain in the area and access is restricted to local residents.  The fire is reported to be about 1500 acres and burning actively.  There are reports that structures have been burned including homes but a full assessment of the damage will not be completed until later.  The cause is under investigation by the Sheriff’s Office.  There are no evacuation orders in effect.  Residents are encouraged to stay in touch by registering their phones on www.readygallatin.com  information on preparing for wildfire in your community is also available on that web site.