(Big Sky, Mont.)  Thursday afternoon at 4:00 the Gallatin County 911 Center received a call reporting an injured bow-hunter on Buck Ridge South of Big Sky, MT.  The 61 year old man from Indiana had fallen down a steep hill while bow hunting.  During the fall one of his arrows came loose from his quiver, impaling him in the upper right thigh.  The arrow was removed and one of his hunting partners applied a compression bandage.  Sheriff’s Deputies and volunteers from Sheriff’s Search and Rescue at Big Sky responded to the area on the Buck Ridge Trail thirteen miles west of Highway 191 where SAR members located the hunter’s 4×4.  The rescue team found the patient on a steep south facing slope, and used low angle roping techniques, were able to lift the rescue litter with the man back to the trail.  He was transferred to a Life Flight Network medical helicopter, which had landed near the trail.  Life Flight then transported him to Bozeman Deaconess Hospital for further medical treatment.

Gallatin County Sheriff Brian Gootkin applauds the individuals in the hunting party for being prepared for this unfortunate situation.  The party had a satellite phone for emergency contact needs and enough medical supplies, and knowledge, to render immediate medical aide.  Being prepared when entering the backcountry is essential, as a normally fun outing can quickly turn into a serious situation.  Photo courtesy of GCSO 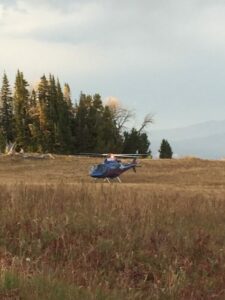