On October 18, 2016 around noon 911 Dispatch received a call from a school chaperone on the Drinking Horse Trail. She reported that one of her students was vomiting and passed out. The ten-year-old boy from Bozeman regained consciousness but needed help down.Members from  Gallatin County Sheriff’s Search and Rescue, Bridger Canyon Fire and AMR responded to the scene. They reached the boy quickly and were able to walk him out. The boy’s mother informed the deputy on scene that he had flu-like symptoms for a week or so, and his condition is probably a result of that. She transported the boy to a doctor.

Sheriff Gootkin would like to remind hikers to be prepared before heading out to the backcountry. This means making sure you are in good health. Sheriff Gootkin would also like to thank the committed volunteers that make up the Gallatin County Search and Rescue. Photo courtesy of the Sheriff’s Office. 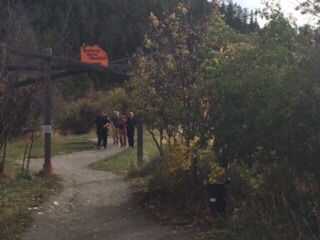