This morning at 10:24 the Gallatin County Sheriff’s Office received a call from the Big Sky Snowmobile Trail Groomer reporting that a snowmobiler had struck a tree in the Sage Creek area, 10 miles from the Taylor Fork parking lot.

The victim, a 37 year old male from Phoenix, AZ was with four other snowmobilers vacationing in the area. The victim was described as displaying signs of a concussion and pain in one of his wrists. An off duty deputy recreating in the area located the victim and was able to provide the Sheriff’s Office with exact GPS coordinates. Members of Sheriff’s search and rescue at  Big Sky, Big Sky Fire and Summit Air ambulance responded to the incident.  Rescuers were able to temporarily treat the victim’s injuries. The long distances and rough terrain can make back country rescues a long and painful process for the victims. Weather and snow conditions in the area allowed rescuers to locate a suitable landing zone near the incident. This allowed Summit Air to reach the victim and transport him to Bozeman Deaconess Hospital for further medical treatment.

The snowmobile party did not have survival/first aid equipment with them and the incident could have been much more serious if had not been for the groomer being in the area and rapid response of rescue units.

Gallatin County Sheriff Brian Gootkin would like to remind snowmobilers to be careful and know their limitations, the limitations of their snowmobiles and the changing snow conditions. Be alert for hazards such as trees, hidden stumps and rocks which can be unpredictable and unforgiving. Also remember to have first aid and survival equipment (food, GPS, charged cell phone, fire starters, etc.) with you when ever you travel into the back country. 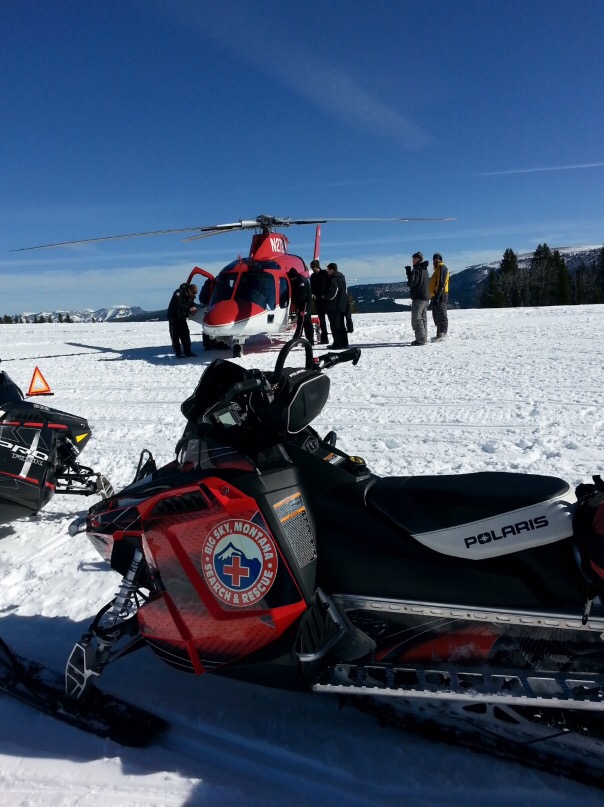