(Gallatin County, Mont.) Today at 12:48 pm., Sheriff’s Search and Rescue in West Yellowstone received a report of a snowmobile accident on the Two Top Trail near junction 16 southwest of the Town of West Yellowstone.

A sixty-seven year old male from Island Park Idaho was riding a snowmobile with a group of 30 people when his snowmobile went off trail and struck a tree. The man was unconscious for approximately 10 minutes and was struggling to breathe on his own. A nurse who was traveling with the group was able to get the man to breathe on his own by simply changing his position.

The Rescuers arrived by snowmobile a short time later and were successfully able to load the man onto a rescue sled and transport him back to town and into an awaiting Hebgen Basin Fire District ambulance. The Air Idaho medical helicopter arrived on scene seven minutes later and the man was flown to Eastern Idaho Regional Medical Center in Idaho Falls. The patient was conscious and breathing with no other injuries when he was transported.

Sheriff Gootkin would like to remind everyone enjoying our backcountry areas to travel with others and always carry some form of communications with you. While you don’t have to have it powered on constantly, do check it often in case someone is trying to contact you and so that you can contact others if needed. 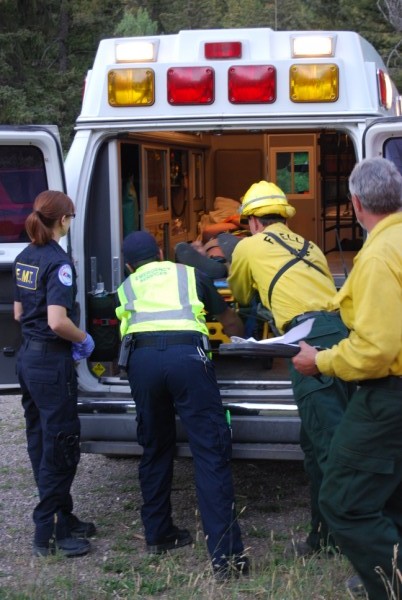