Public tour: The Incident Management Team would like to thank the attendees of the public tour this evening.. Fifty people attended the tour of the Incident Command Post of the Miner Paradise Complex.

Park County 911 encourages residents to sign up for Emergency notifications with your cell at: www.livingstonmontana.org and www.parkcounty.org

Fire activity was moderate today as firefighters worked to secure edges and continued to mop up more areas along the fires’ perimeters. Two 20-person crews were added to the efforts and will be working the fires Thursday. Temperatures in the 70’s and 80’s and moderate humidity is predicted for the next several days along with isolated thunderstorms which could bring scattered showers, gusty outflow winds and lightning.

THURSDAY’S PLANNED ACTIVITY: Firefighters will continue to seek out hot spots throughout the day. Crews will continue constructing and improving direct hand line which requires heavy saw work on the west, south and east sides of the fire. Structure assessments and protection efforts are finalized in the areas south of the Emigrant Fire as well as along the Mill Creek and Cedar Creek areas.

WEDNESDAY’S ACTIVITY: Fire activity ranged from creeping and smoldering, to hot spots burning on the northwest corner. Crews continued fire line construction and mop up along areas of the fire while scouting for opportunities to place direct handline on the southern edge of the fire and battling several hot spots.

CLOSURES & OTHER INFORMATION:  The Emigrant Fire Closure includes National Forest System lands along the western boundary, north to National Forest System Lands around Chico in section 13, running east to the West Fork of the Mill Creek Road including Chico Peak. Trail # 78 Wicked Trail is closed.  This closure extends south to Fish, Knox, and Thompson Lakes. Monitor Peak and trails leading to are also closed continuing west and including all National Forest System Lands directly adjacent to Dome Mountain WMA. The Monitor Peak Trail #61, Trail #62 to Knox and Fish Lakes along with Trail #33 bumping into Trail #60 to Monitor Peak from the South.  A full map is available on Inciweb under maps. Additional Trail closures include  the North Fork of Bear Creek #60, Knox Lake #64 and #279 Monitor Peak Connector Trail on the Gardiner and Yellowstone R.D.’s

People traveling near the Emigrant Fire Helibase are urged to be cautious of fire personnel and the helicopter operating near Conlin Road.

PERSONNEL AND RESOURCES ON THE FIRE: 1 Type 2 IA crew, 5 engines

THURSDAY’S PLANNED ACTIVITY: Crews will patrol the west edge of the fire. Firefighters also will continue mop up work on the perimeter of the fire, working deeper into Horse Creek, while extinguishing hot spots.

WEDNESDAY’S ACTIVITY: Fire activity was creeping and smoldering at ground level. Crews rehabbed all contingency dozer lines north of the fire’s edge and continued mop up efforts as far as 100 feet inside the line.

PERSONNEL AND RESOURCES ON THE FIRE: 1 Type 2 crew

Contingency lines were improved and hose lays were continued in the East Fork drainage on Wednesday. Thursday’s plans call for crews to clear brush and strengthen the containment fire lines and monitor the fire activity in Flanders Creek.

CLOSURES: East Fork Hyalite – East Fork of Hyalite is closed including Palisade Falls Trailhead and picnic area, Emerald Lake Trailhead and Flanders Creek drainage.  Gate is closed at East side of Hyalite Dam including Chisholm, and Hood Creek campgrounds and Palisades, Emerald Lake and Flanders Creek Trailheads are closed.  Windowrock and Maxey Cabin are closed.  Blackmore Day Use Area will remain open.  This closure is due to the Horsetail Fire.

PERSONNEL AND RESOURCES ON THE FIRE: Unstaffed, air patrol.

The fire was monitored by aircraft and very little fire activity was observed today on the fire. An aerial patrol will continue Wednesday.

FIRE WEATHER: Thursday’s weather will be mostly sunny in the morning, with scattered thunderstorms in the afternoon with temperatures ranging from 70s to 80s with relative humidity 20-30 percent and winds out of the southwest around 20-30 mph. Friday and Saturday’s weather is expected to bring drier conditions.

For further information, go to: http://www.inciweb.org 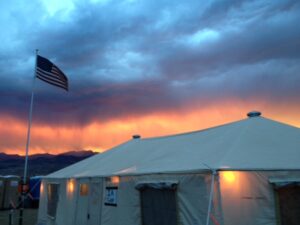 Each of the fires are currently listed under the Miner Paradise Complex.