On September 27, 2021, at 8:34 am, Gallatin County Dispatch received a call for help at the Upper Triple Tree Trail. While returning to the trailhead, a cyclist was going over rough terrain and braked hard, causing them to fall forward over the handlebars resulting in multiple injuries. Gallatin County Sheriff Search and Rescue, Hyalite Fire, and AMR were dispatched to the trailhead.

Gallatin County Sheriff Search and Rescue resources arrived on scene with the cyclist approximately half a mile from the trailhead. Search and Rescue members assisted Hyalite Fire and AMR with bringing the injured biker to the trailhead via one wheeled litter.  AMR subsequently transported the individual to Bozeman Health for further evaluation.

Sheriff Dan Springer would like to remind recreationalist that accidents can happen to anyone, no matter the experience level.  Always recreate with a friend when possible and carry a reliable source of communication should anything happen. 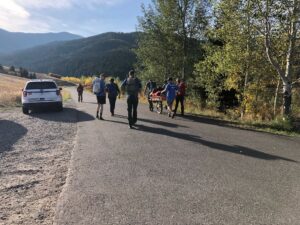 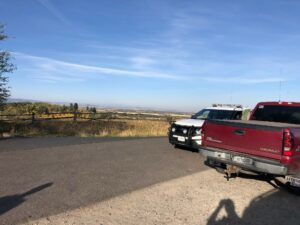 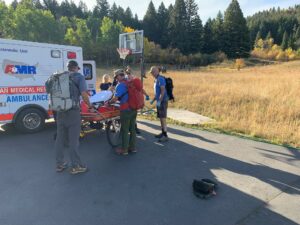 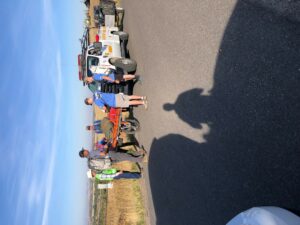 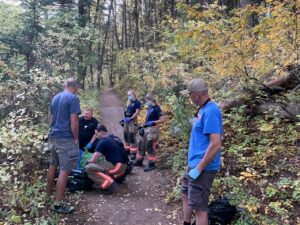 As of 2:00 Sunday afternoon the Liberty County Sheriff’s office has been able to account for all of the passengers that were on board the Amtrak train that derailed yesterday.  Challenges included the number of patients, transports to 5 different medical facilities around the state and manifest discrepancies.  The passengers were triaged and treated at two community clinic/medical Center in Chester and Shelby.  Ten of those with more serious injuries were transported to Great Falls, Havre and Kalispell.  The number of fatalities remains at 3.  Next of kin are still being notified so the names will not be released at this time.  The Liberty County Sheriff’s has completed its investigation and will be transferring the scene to NTSB when they arrive later today.

Sheriff Erickson thanks the neighboring Counties and their first responders for the assistance, he said, “Or neighbors made a tragic event better and no doubt saved lives.”

All press inquiries will be handled by Amtrak and by NTSB starting this afternoon.

On September 24, 2021 at 6:04pm, a hunter called 911 due to being lost in the backcountry near Portal Creek. The hunter had a well charged cellphone but spotty cell service. After providing essential information to dispatch and Search and Rescue personnel, the hunter was instructed to remain stationary and keep checking in at regular intervals via phone. Gallatin County Sheriff Search and Rescue in Big Sky responded with ground volunteers, including a search dog team.  Billings Clinic MedFlight assisted by flying over the area to confirm the coordinates obtained from the 911 call.  The helicopter crew spotted the lost hunter at dusk.  With darkness fast approaching it was determined that landing at a safe location nearby could bring a speedy conclusion to the rescue.  With MedFlights assistance, the lost hunter was collected and flown to a Gallatin County Sheriff’s Office Deputy at another location for further assistance.

For the next couple of months, hunting season will take hunters off trail into new terrain. Sheriff Dan Springer would like to remind them to be prepared for unexpected overnights, have a map and compass and know how to use them, and consider bringing a GPS locating device. In this case, the hunter was able to send out a call for help and then remain stationary so responders could come to that location. Recognizing when they were lost, calling for help early, and not compounding the situation by continuing to move, helped the Gallatin County Sheriff Search and Rescue team bring this event to a quick and safe conclusion.

(Chester, Liberty County, Mont) At 3:57 P.M. MST on September 25, 2021, the Liberty County Sheriff’s Office received word of a significant train derailment near Joplin, Montana. The Sheriff’s Office and local fire departments responded immediately. There were between 100 and 150 people on board.  There were injuries that were transported to hospitals in the surrounding area. There were at least 3 deaths. Names are not being released until family can be notified.  Amtrak is working with the sheriff’s office and local EMS to transport uninjured passengers and reunite all other passengers with family. The National Transportation Safety Board is on its way to investigate the incident.

Our deepest condolences go to the family and friends of the people who were killed in this tragic event. We thank the law enforcement and firefighters for their prompt response and work to rescue passengers.####

All press inquiries will be handled by Amtrak.

The Gallatin City-County Health Department is saddened to announce that three more Gallatin County residents have passed away from complications due to COVID-19.

On September 16, 2021, at 6:00pm Gallatin County Dispatch received a call from a hiker who was separated from two other members of their hiking group.

The group departed from Bear Canyon expecting to hike a loop and return to the same location. While hiking, the group became lost and started to walk in the wrong direction. One hiker was able to walk ahead of the group and make a phone call to Gallatin County Dispatch.

Gallatin County Sheriff Search and Rescue volunteers from the Valley Section responded and deployed ATV/UTV teams up Sourdough Trail. A helicopter from Billings Clinic was also deployed to look for the missing hikers along the trail system.

Search and Rescue teams located the hikers with assistance from the first hiker’s last known position. There were no reported injuries.

Sheriff Dan Springer would like to remind hikers that a simple day on the trail could take an unexpected turn at any time. Therefore, take extra food, water, and a fully charged cell phone wherever you hike. Furthermore, make sure you have extra clothing, for cold weather is upon us!

On September 16, 2021 at 5:04pm, Gallatin County 911 received a report from an individual whose side-by-side broke down near Big Bear Lake in Little Bear Canyon.

Sheriff Springer would like to remind all motor sport recreationalists to always wear safety gear, and carry plenty of food, water, a map, and extra clothing in the likely event of unexpected weather changes.

On September 12, 2021, at 11:12 am, Gallatin County Sheriff Search and Rescue responded to a report of a paragliding accident in the Bridger foothills.

A paraglider flew too low while descending from the launch point above the “M”.  The pilot snagged a tree, resulting in a back injury from the crash.  The pilot made phone contact with other paragliders who very quickly contacted 911.

Due to the mechanism of injury, an air extraction was necessary from the mountain terrain.  Gallatin County Sheriff Search and Rescue responded with a ground team to make initial contact with the patient, as well as a helicopter team to coordinate a “short haul” from the crash location to an AMR ambulance at Sypes Canyon trailhead.

The patient was located, packaged, and ultimately transported to Bozeman Deaconess Hospital, where they received further treatment for their injuries.

Sheriff Dan Springer would like to remind you to call for help in the case of an emergency.  A direct call to 911 provides instantaneous information updates to first responders as well as a precise location of the incident. 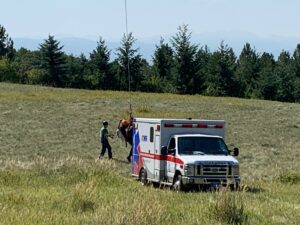 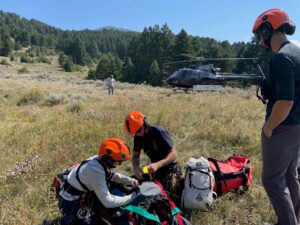 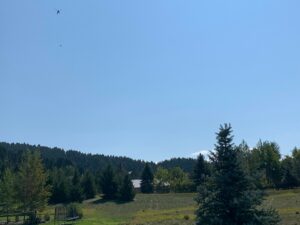 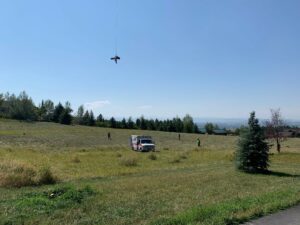 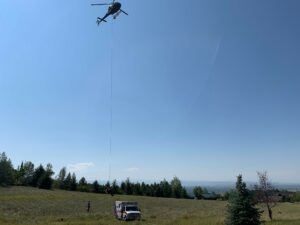 On September 12, 2021, at 1:11 pm, Gallatin County Dispatch received a call for help at the “M” trailhead. An experienced hiker fell while hiking down the long route of the M trail. A muscle spasm caused the hiker to lose footing and, consequently, fall onto some rocks resulting in a back injury. Gallatin County Sheriff Search and Rescue, Bridger Canyon Fire, and AMR were dispatched to the trailhead.

Sheriff Springer would like to remind the public that even experienced hikers can slip, trip, or fall.  A cell phone was used to relay patient information and provide an accurate location to rescuers.  Preparation, such as having a charged cell phone and a hiking buddy along, can greatly assist rescue operations.

While major updates to Lone Mountain Trail/MT Highway 64 in Big Sky were delayed this year, the project is moving forward this fall with some important components of the project beginning construction this month while the rest of the project is re-bid.