The Gallatin County Commission has lifted the county-wide burn ban as of Tuesday, Aug. 31.

Citing recent rainfall and cooler temperatures, and safer fuel levels, the Commission on voted 3-0 on Tuesday to rescind the county’s burn ban ordinance adopted on July 20.

“Everything points to us rescinding these current restrictions,” said Commission Chair Scott MacFarlane, adding, “We can always go back as needed.”

“I’m grateful to the folks across the county who have done their part to keep things from getting away from us here in Gallatin County. And I’m grateful for the work of firefighters and first responders across the state and nation,” said Commissioner Zach Brown. 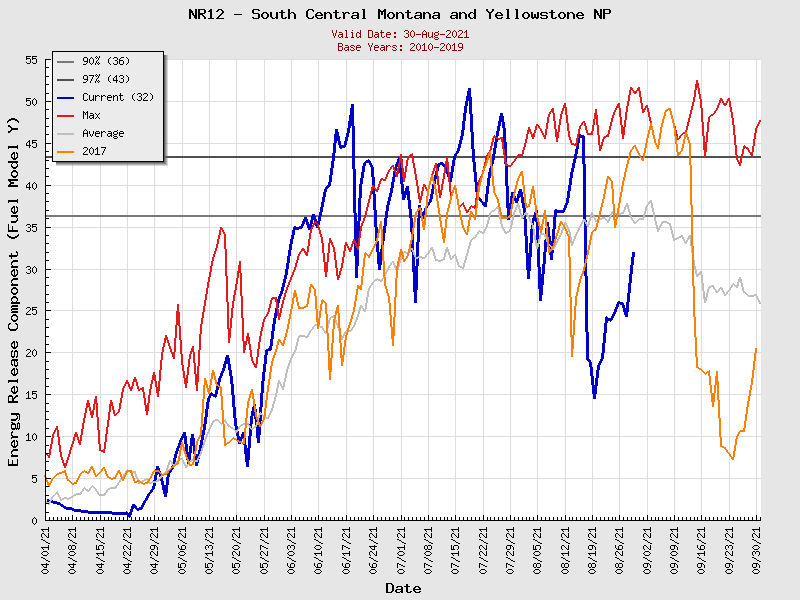 Patrick Lonergan, Gallatin County’s chief of emergency management and fire, reminds everyone to continue burning responsibly as fire season in Montana has not ended.

“Gallatin County’s wildland fuel conditions are now closer to average for this time of year, but keep in mind this does not mean that a fire can’t escape and become a large fire,” Lonergan said. “It is imperative that everyone follow safe burning practices at all times and never burn when weather conditions aren’t safe. Let’s not forgot the Bridger Foothills Fire occurred on September 4.”

Burn permits are still required for non-recreational fires. Many fire districts will continue to keep open burning closed until further into the fall when even safer burning conditions exists in their areas.

Burn permits and the most current open burning status information is available at gallatinburnpermits.com.

Residents are encouraged to register for the Community Notification System to ensure they receive timely information about an emergency happening in Gallatin County. For free registration, visit alerts.readygallatin.com.

Tomorrow, fire restrictions will be lifted on public lands within the Custer Gallatin National Forest including the Bozeman and Hebgen Lake Ranger Districts. Last week, the City of Bozeman also lifted its burn ban. And surrounding counties in southwestern Montana are in the process of rescinding similar restrictions.

On August 28, 2021, at 10:01 A.M. Gallatin County 911 received a call for an individual who suffered a seizure while hiking Middle Cottonwood Canyon with a group of friends. After the seizure the hiker was incoherent and unsure of their location.  A nurse hiking at the same time called 911, stayed with the patient, and was able to relay further information to responders.

Sheriff Dan Springer would like to remind recreationalists that accidents and medical events can happen at any time, anywhere.  Traveling with a partner and having a way to call for help can aid in a fast rescue.  Should you have to recreate alone, always tell someone where you are going and when to expect you back. 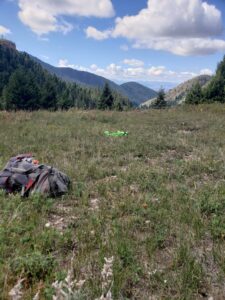 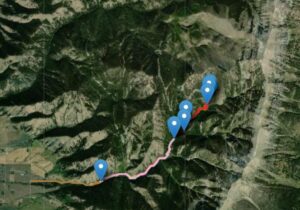 Bozeman Health, Billings Clinic Bozeman, Community Health Partners, and Gallatin City-County Health Department are committed to the health and well-being of the communities we have the honor of serving. Leaders, physicians, providers, and healthcare workers within our respective organizations strongly support the recent decisions of Montana State University, Bozeman School District, and all local schools that require masks of school faculty and staff, students, and visitors.

On August 23, 2021, at approximately 2:00 pm, Gallatin County Dispatch received a 911 call from a stranded motorist on a Forest Service road near Little Bear Rd. The motorist rented a side by side All Terrain Vehicle (ATV) and had taken three children into the mountains. The motorist became stuck and could not get the vehicle out. Luckily, no one was injured, and the motorist had enough service to call 911.

Gallatin County Sheriff Search and Rescue (GCSSAR) volunteers responded to the area.  Utilizing GCSSAR ATV’s rescuers were able to locate the motorist and children. They were able to get the ATV back onto the trail, and they all rode out together.

Sheriff Springer would like to remind everyone to exercise caution when recreating in the wilderness as accidents can happen to anyone. Familiarize yourself with new equipment and make sure to have extra supplies, water, and a communication device to call for assistance if you need it. 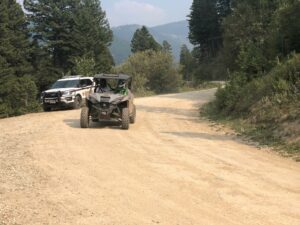 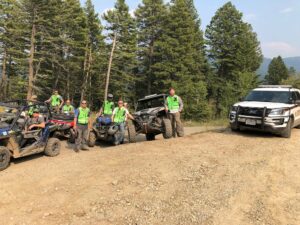 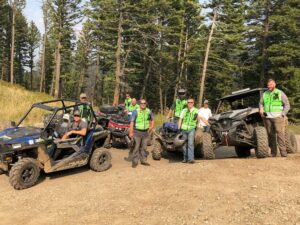 On August 17, 2021, at 10:14 am, Gallatin County dispatch received a call from a person on the M Trail with a dislocated shoulder.  The caller was at the top of the M Trail and needed assistance to the trailhead after sustaining a fall injury.

Gallatin County Sheriff Search and Rescue members responded to the trailhead and deployed a hasty team immediately up the trail to assess and stabilize the patient.  Secondary teams deployed up the trail with a one-wheel litter and additional gear.  American Medical Response and Bridger Canyon Fire Department were also dispatched to assist.

Search and Rescue teams quickly arrived on scene with the patient. They assessed the injury and were able to stabilize the shoulder, enabling the patient to walk down the trail.  Team members safely arrived at the trailhead and the patient was subsequently transported Bozeman Health for further evaluation.

Sheriff Dan Springer would like to remind outdoor enthusiasts that slips, trips, and falls can happen on well-traveled trails such as the M.  In this case having a charged cell phone and a friend along for the outing assisted rescuers in obtaining further information, directly from the patient, resulting in an efficient rescue operation. 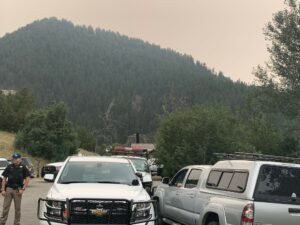 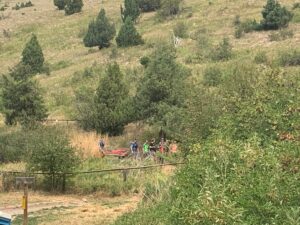 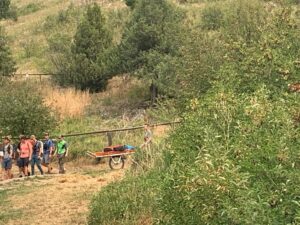 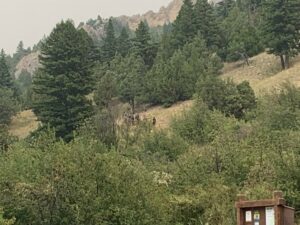 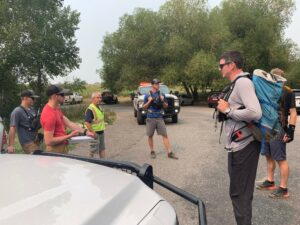 Gallatin County Sheriff Search and Rescue responded to the Leverich Canyon Trailhead along with Hyalite Fire and AMR.  SAR members met the patient approximately 1.5 miles up the trail.  The patient suffered an upper leg injury and was in substantial pain.  The patient received initial medical care and pain management on scene.  The team used a one wheel litter to transport the patient to the trailhead. Once safely at the trailhead AMR subsequently transported the individual to Bozeman Deaconess Hospital.

Sheriff Dan Springer would like to remind you that even the most experienced recreationalists have mishaps.  Remember to always take a partner, plenty of water, sunscreen, a first aid kit and be prepared for any weather changes. 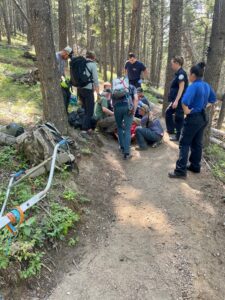 The Gallatin City-County Health Department will be hosting a number of immunization clinics for children entering kindergarten through twelfth grade who are in need of vaccine updates. There will also be an option for kids 12 and up, as well as their parents/guardians, to receive a COVID-19 vaccine.

For more details on what to bring to this clinic, please click here.

The Gallatin County Commission unanimously voted today to put a $29 million bond on the general election ballot this November.

The bond will be used to replace the current Law and Justice Center, located in Bozeman, with a new single-story, 57,000-square-foot building that will house the following:

Property taxes on a home with an assessed market value of $500,000 would increase by $33.50 per year. However, that amount would decrease each year as more property taxpayers move into our rapidly growing county.

Gallatin County Commission Chairman Scott MacFarlane said that “a new court building is the only cost-effective solution to Gallatin County’s short-term and long-term needs for safe and efficient courts.”

MacFarlane called the proposal a responsible solution to the issues facing the current courts facility, problems that have been impacting taxpayers for two decades and that will persist as Gallatin County continues growing.

“This is our most responsible and best project to solve the court needs,” MacFarlane said.

Commissioner Joe Skinner noted that voters have rejected two previous proposals to replace the building, but said the county has listened to voters and found unique and creative ways to cut down project costs and still address the courts’ needs.

“I really think we got it right this time,” Skinner said. “This is the right project at the right time. I’m happy to be able to put this on the ballot.”

Commissioner Zach Brown said this project is “fundamentally a need, it is not a want,” noting that the county must find space to house an incoming fourth District Court judge recently funded by the Montana Legislature.

“Our justice system is a constitutionally protected and mandated service. It’s fundamental to the way our economy and democracy work,” Brown said. “I’m really looking forward to having a robust conversation with taxpayers about this project between now and November.”

When a replacement building was proposed in 2019, the price was $60 million. By using value engineering, strategic design and a smaller footprint, the new construction plan will reduce the cost to $38 million. But taxpayers will pay less. Gallatin County has been saving for this project and will cover about 25% of the construction at no additional cost to the taxpayers. And the county was able to purchase a new facility for Gallatin County Sheriff’s Office operations, making this proposal even smaller. In effect, the total bond—that is, the cost to the taxpayers—has been reduced to $29 million.

The current Law and Justice Center was built in 1961 as a Catholic high school and later retrofitted into a law enforcement and courts facility. The structural integrity of the building is compromised and it lacks a fire suppression system. This endangers thousands of citizens who utilize the building every month – from those serving our community working there daily, to those serving their civic jury duty, getting married, being granted adoptions, seeking orders of protection, and those settling life-altering disputes.

There is also a lack of space in the current building. There are not enough courtrooms – which the county is constitutionally mandated to provide to our state-allocated judges – or administrative space to handle current caseloads. The 2021 Montana Legislature approved funding for a fourth District Court judge, who is slate to arrive as soon as January 2022, and the county must provide space for that judge and their staff.

This current lack of space means civil court cases can see wait times for adjudication stretch into years, at the expense of our area businesses.

This also means extended wait times for criminal trials, meaning defendants spend longer in jail or on pretrial supervision, both of which are expenses passed on to taxpayers.

And for victims involved in criminal trials who are seeking justice so they can move forward with their lives, their day in court becomes a far-too distant point on the horizon.

In addition to the human cost of an inefficient, unsafe justice center, construction costs in Gallatin County are increasing by an estimated 10% year over year. This same project proposed in the future is likely to cost much more.