At 3:54PM Gallatin County Dispatch advised deputies that Broadwater County Deputies were in a pursuit with a black Mitzubishi Outlander, south bound on Hwy 287, coming towards Gallatin County.

The vehicle had earlier been reported stolen from Lewis and Clark County, by a female with a firearm. The vehicle refused to yield to law enforcement and a Gallatin County deputy used spike strips near the intersection with I-90, to deflate 2 of the vehicles tires.

The pursuit continued in and around the town of Three Forks before going south on Old Yellowstone Trail. The pursuit went through Willow Creek and continued about three miles south where it stopped.

The female driver refused to come out of the vehicle. Deputies negotiated with her for about 20 minutes, before she agreed to come out and be taken into custody. No injuries were received by the suspect or law enforcement personnel.

Today at about 3:00 P.M. Sheriff’s Deputies were dispatched to an address near Zoot Enterprise Lane and Zoot Way near Four Corners.  A 20 year old Gallatin County Resident was threatening suicide and was armed with a hunting rifle.  Deputies were concerned for the safety of the public and school children riding home on the bus.  A several block area was isolated and the Emergency Management telephone notification system was used to advise people in the area.  Negotiators from the Sheriff’s Office and Bozeman Police made contact with the man and at about 5:00 P.M. he was taken into protective custody without injury.  He will be evaluated by mental health professionals.

This is a message from the Gallatin County Sheriff’s Office. Law Enforcement is currently managing an incident with an armed subject in the area of Zoot Way in Four Corners. Everyone is asked to stay clear of the area while law enforcement addresses the situation. Many roads are currently closed and your assistance in staying clear of the area is greatly appreciated. Additional information will be made available to local media when possible.

At 3:00 p.m. on Tuesday, Gallatin County 9-1-1 received a report from Meagher County Dispatch that three individuals got their pickup stuck on Sixteen Mile Road in the remote North end of Gallatin County, a short distance south of the Meagher/Gallatin County line. While the three males were trying to get their truck out of the snow and mud, one of them, a 55 year old man with a history of cardiac surgery, began experiencing difficulty breathing. His condition worsened and his brother called 9-1-1. Based on GPS coordinates received from the phone call, Meagher County was able to give Gallatin County dispatch an accurate location of the males.

The call was dispatched to Gallatin County deputies, as well as the closest fire departments, and AMR ambulance. Due to the remote location of the incident, Gallatin County Sheriff’s Search and Rescue was also dispatched. Sheriff’s Deputies activated Reach Air Ambulance, and a medevac helicopter was launched at about 3:15, reaching the men about 15 minutes later. Flight paramedics and nurses evaluated the man and he was transported to Bozeman Health. At last report, the male was conscious and alert, and was admitted to the hospital.

Gallatin County SAR personnel continued to the scene of the stuck vehicle, and met Bridger Canyon Fire Dept., as well as the Meagher County Sheriff’s Office and Meagher County Rural Fire Dept. The vehicle was pulled out of the ditch, and the men were escorted out on the long drive back to Bozeman.

Sheriff Gootkin would like to take this opportunity to remind travelers and recreationists to be alert for rapidly changing weather and road conditions, and to be prepared and equipped to spend several hours in less than ideal conditions. Also, a more specific reminder that Sixteen Mile Road is not regularly maintained, and is considered to be impassable during the winter months. In the space of one week, two instances of stuck vehicles led to Search and Rescue operations on Sixteen Mile Road.

Long time Bozeman resident William C Franks, 72, was found deceased at his residence in Bozeman today. His death is being jointly investigated by the Bozeman Police Department and the Gallatin County Sheriff / Coroner’s Office.

Just before noon Tuesday, the Bozeman Police Department received a call of a stabbing at an address on N 9th Avenue in Bozeman.  Police located a deceased adult male in the residence.  37-year-old Tanner McCann Franks was arrested by Sheriff’s Deputies in Big Sky and is charged with deliberate homicide.   The incident is currently under investigation and the Victim’s name is being withheld pending family notification.

There will be a press conference Wednesday morning at 9:00 am at the Community Room at the Gallatin County Detention Center.

The Gallatin County Sheriff’s Office has received multiple calls regarding an ongoing scam. The scammer identifies himself as a Lieutenant with the Sheriff’s Office and informs people they have missed jury duty or that they have come across paperwork that needs to be resolved. In both cases, they request the person call 406-924-9989 to resolve the matter. This is a scam and we would like to remind everyone that the Sheriff’s office will not request money.

On the morning of November 14, 2017, the Bozeman Police Dept. took a missing person report of a 69 year old female who was a day overdue from her census duties. She told a co-worker that she would be doing demographic surveys north of Belgrade, possibly in the Dry Creek, Blacktail, Maudlow, and/or Rocky Mountain Road areas. Co-workers and family had not been able to reach her by phone and were concerned for her safety. Deputies knew the described areas to be remote, rural areas of Gallatin County, and requested that Search and Rescue personnel be deployed to help look for the female and her vehicle.

SAR resources were paged at approximately 1:45, and began to search roads in the Dry Creek and Rocky Mountain Road areas. A Search and Rescue Deputy met a volunteer rescuer in the Sixteen Mile Creek area when, at 3:00, they stopped a truck coming down the road from further up the Sixteen Mile Road. The missing census worker was with the driver, and was found to be fairly thirsty, but in good health and spirits.

The female reported that she got stuck in deep snow on the unmaintained road at approximately 3:20 on Monday the 13th. She did not have cell service, and decided to stay with her vehicle until someone came by. The female had some food and extra clothing and a sleeping bag, and was able to stay fairly comfortable while she waited through the night. She was preparing to spend another night when the male came upon her vehicle and gave her a ride. The deputy transported the female back to her residence after making sure co-workers and family were notified that she was ok.

Sheriff Gootkin notes that the female did several things right, including traveling with items to help during an emergency, and staying with her vehicle instead of trying to hike out in unfamiliar country. Moving away from vehicles or other last known points makes things more challenging for rescuers, and a vehicle can serve as adequate shelter during inclement weather.

(Gallatin County, Mont.)  Just because the ski hills are not open yet does not mean there is no skiing.  Recent snow fall has lured skiers into the mountains and with that comes the occasional rescue.  Today at about 5:30 P.M. a 19 year old MSU student fell after a jump at Bridger Bowl Ski area breaking his lower leg.  Sheriff’s Search and Rescue units were dispatched along with the Bridger Canyon Fire Department and AMR ambulance at 6:00 P.M. after someone found him and made their way to cell service to call 911.  Rescuers used snowmobiles and a rescue sled to transport him the rest of the way down the mountain to a waiting ambulance.

Sheriff Gootkin reminds us that early season skiing carries extra risk.  “Even if you are on a ski area there is no avalanche control or ski patrol until they open later this month.  You have to take that into account and spend the time to get educated and be prepared for emergencies.  Ski with a  partner, carry avalanche gear and emergency supplies.”

Photo courtesy of the Sheriff’s Office.  Volunteer Rescuers cleaning up and getting ready for the next call after the rescue at Bridger Bowl. 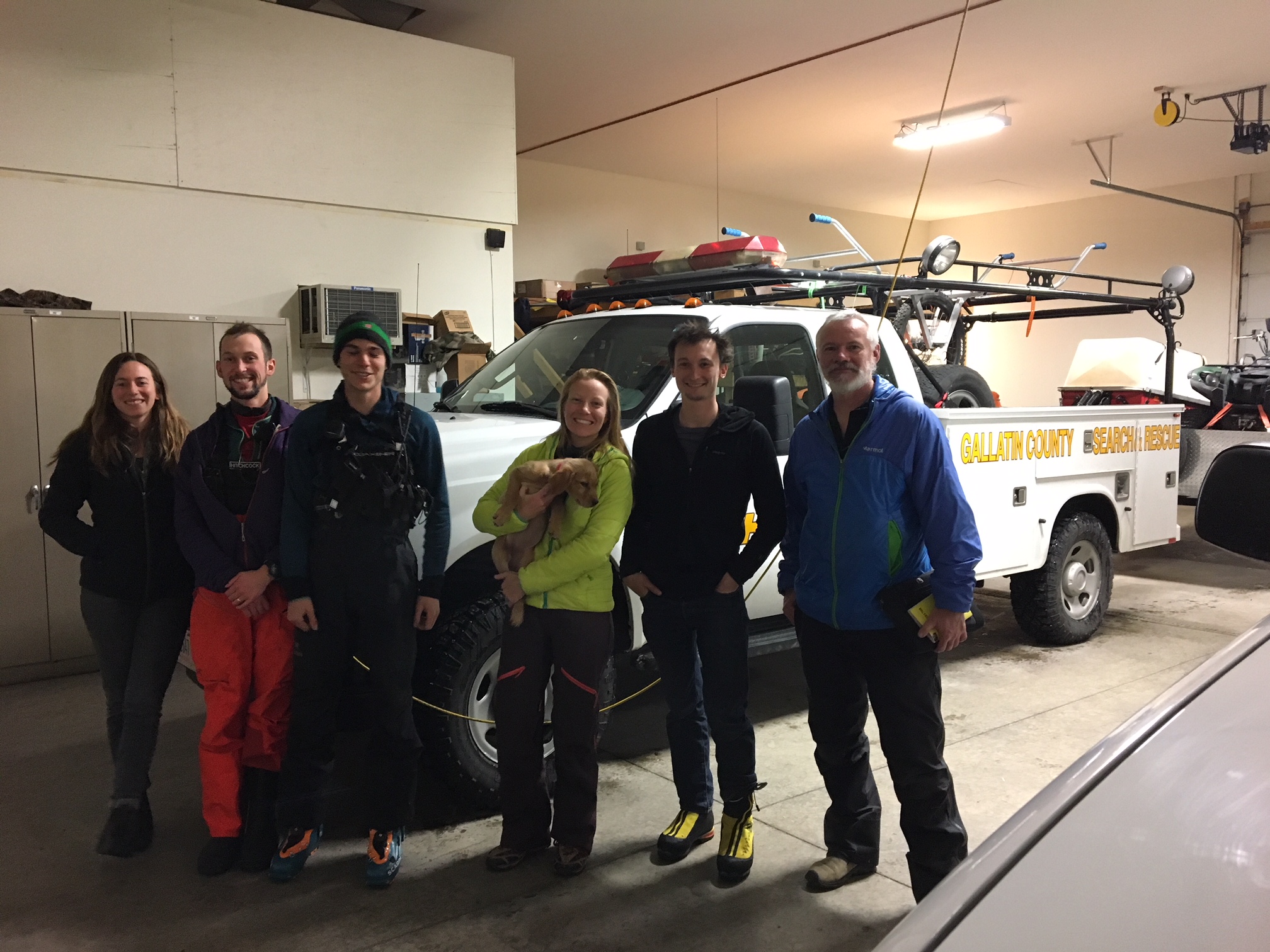