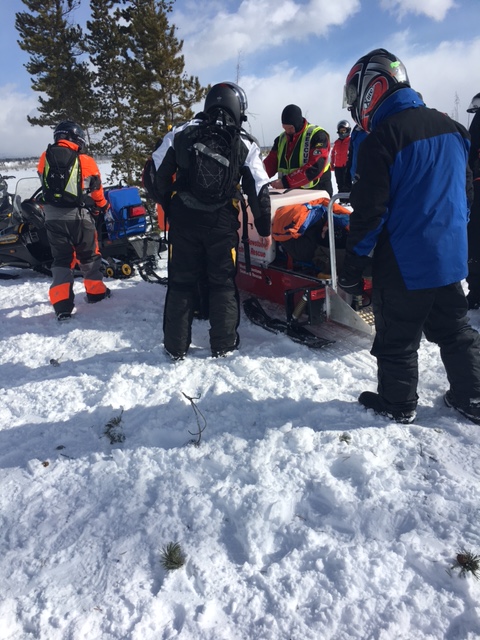 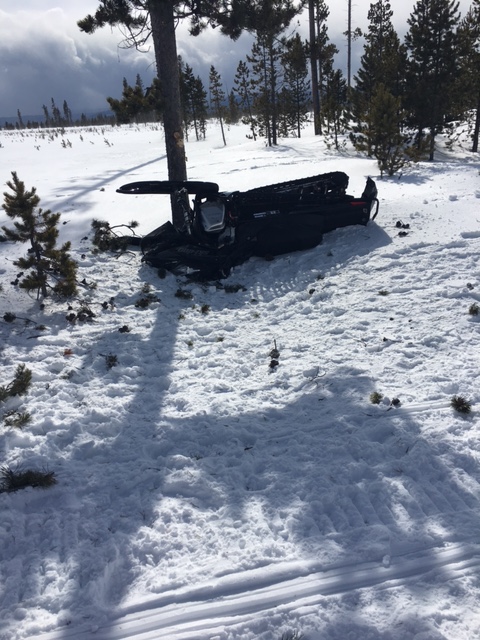 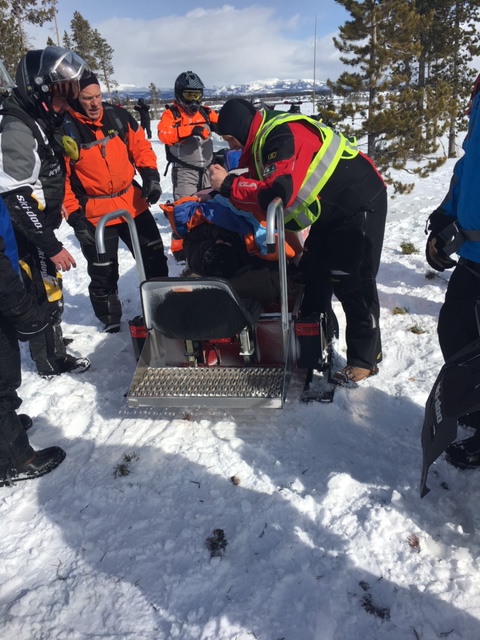 (Gallatin County, Mont.) On Saturday, February 25, 2017 at 1:00 pm., the West Yellowstone Police Department Dispatch center received a 911 call reporting a snowmobile crash on the Madison Arm Trail approximately 8 miles northwest of West Yellowstone. The injured party, a 16-year-old male from Illinois, had sustained a compound femur fracture when his snowmobile hit a dip in the trail and he collided with a tree.
Personnel from Gallatin County Sheriff’s Office Search and Rescue West Yellowstone Division responded.

Rescuers quickly located the male, packaged him onto a rescue sled, transported him four miles by snowmobile and then transferred him to a Hebgen Basin Fire Department Ambulance staged at the trailhead off of Highway 191. The male was transported to Big Sky Medical Center where the ambulance crew and patient were met by Reach Medical helicopter. Reach then transported the patient to Bozeman Deaconess Hospital.  Gallatin County Sheriff Brian Gootkin says this is the 6th snowmobile rescue in the last 7 days which is not unusual for this time of year in West Yellowstone.  He stated the volunteers in West Yellowstone are very practiced at these events and if you have a bad day they are the ones you would want coming after you. Please pay particular attention to icy and uneven areas as they can quickly cause loss of control of the sled. Always remember to ride with a partner and carry a reliable means of communication in case of an emergency.
Photos courtesy of the Sheriff’s Office.

On Friday, February 24, 2017 at 12:35 pm., the West Yellowstone Police Department Dispatch center received a 911 call reporting a snowmobile crash on the Cougar Creek Trail approximately five  miles northeast of the Town of West Yellowstone. The injured party, a 55-year-old female from North Carolina, had sustained a leg, groin, and hip injury when her snowmobile hit a dip in the trail and she was thrown into a tree.

Personnel from Gallatin County Sheriff’s Office Search and Rescue West Yellowstone Division and Hebgen Basin Rural Fire District responded.
Rescuers quickly located the female, packaged her onto a rescue sled and transferred her to a Hebgen Basin Fire Department Ambulance staged at the trailhead off of Highway 191. The female was transported to the hospital in Rexburg, Idaho.

Gallatin County Sheriff Brian Gootkin would like to remind snowmobilers to monitor their speeds when traveling over rough or unfamiliar terrain.  Please pay particular attention to icy and uneven areas as they can quickly cause loss of control of the sled.  Always remember to ride with a partner and carry a reliable means of communication in case of an emergency. 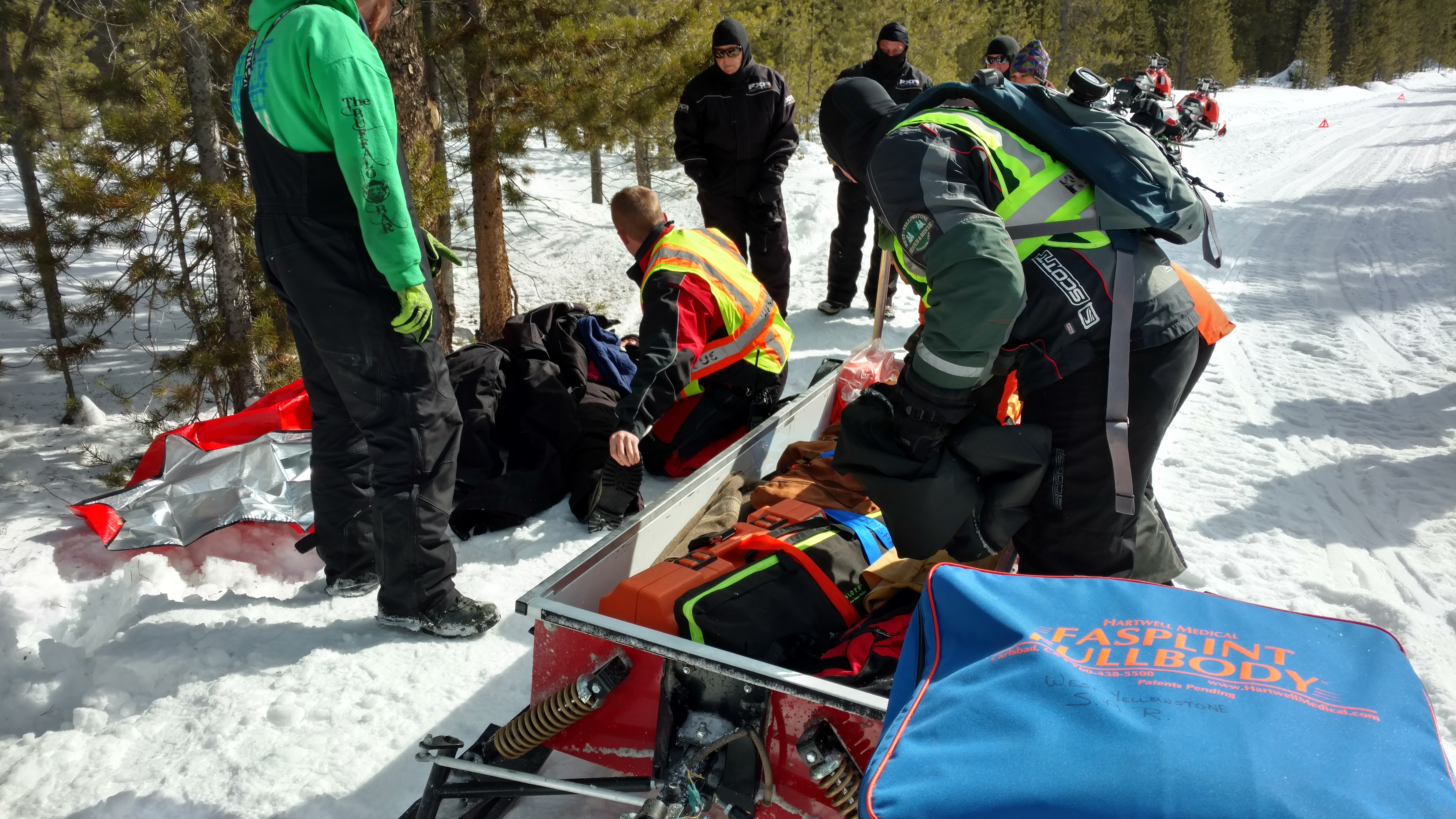 The Gallatin County Sheriff’s Office, Montana Highway Patrol, Bozeman Police Department, Bozeman Fire Department and AMR responded. It was determined that the single occupant, 19-year-old Amanda Gaskill of Broadus (Pumpkin Creek), had died on-scene of the crash prior to the arrival of any EMS units.  Amanda is a registered student at MSU-Bozeman.

The responding Deputy Coroner has released to body for transport to Custer County for final disposition.

A significant increase in snow melt along Valley Center Road is currently being observed. This is causing ditches to overflow and forcing water onto roadways. A clogged culvert under Valley Center Road has been cleared and it appears to have relieved the backed up water. Residents in the area should still closely monitor water conditions around their property throughout the afternoon and recognize that the water may continue to rise into the night as the backed up water empties out. If you think water may affect your house, you should take appropriate actions to protect your house before the water reaches you. People in the area should also use caution when driving as water on the roadways can be dangerous and the water may freeze during the night.

(Gallatin County, Mont.)  On Monday, February 21, 2017 at 2:15 p.m., the West Yellowstone Police Department Dispatch center received a 911 call reporting a snowmobile crash on the Madison Arm Loop approximately 2.5 miles west of West Yellowstone. The injured party, a 13-year-old female from Florida, had sustained head and leg injuries and was reportedly going into shock. The crash occurred when the snowmobile she was riding as a passenger struck a tree causing her head to impact the head of the operator before being thrown from the snowmobile.
Personnel from Gallatin County Sheriff’s Office Search and Rescue West Yellowstone Division responded.
Rescuers quickly located the female, packaged her onto a rescue sled and transferred her to Hebgen Basin Fire Department Ambulance. The female was transported to the Big Sky Medical center for a medical evaluation
Gallatin County Sheriff Brian Gootkin would like to remind snowmobilers to monitor their speeds when traveling over rough or unfamiliar terrain, particularly when carrying a passenger. Riding as a passenger can be just as physically taxing as operating a snowmobile and sudden stops or striking an unseen hazard can result in serious injury 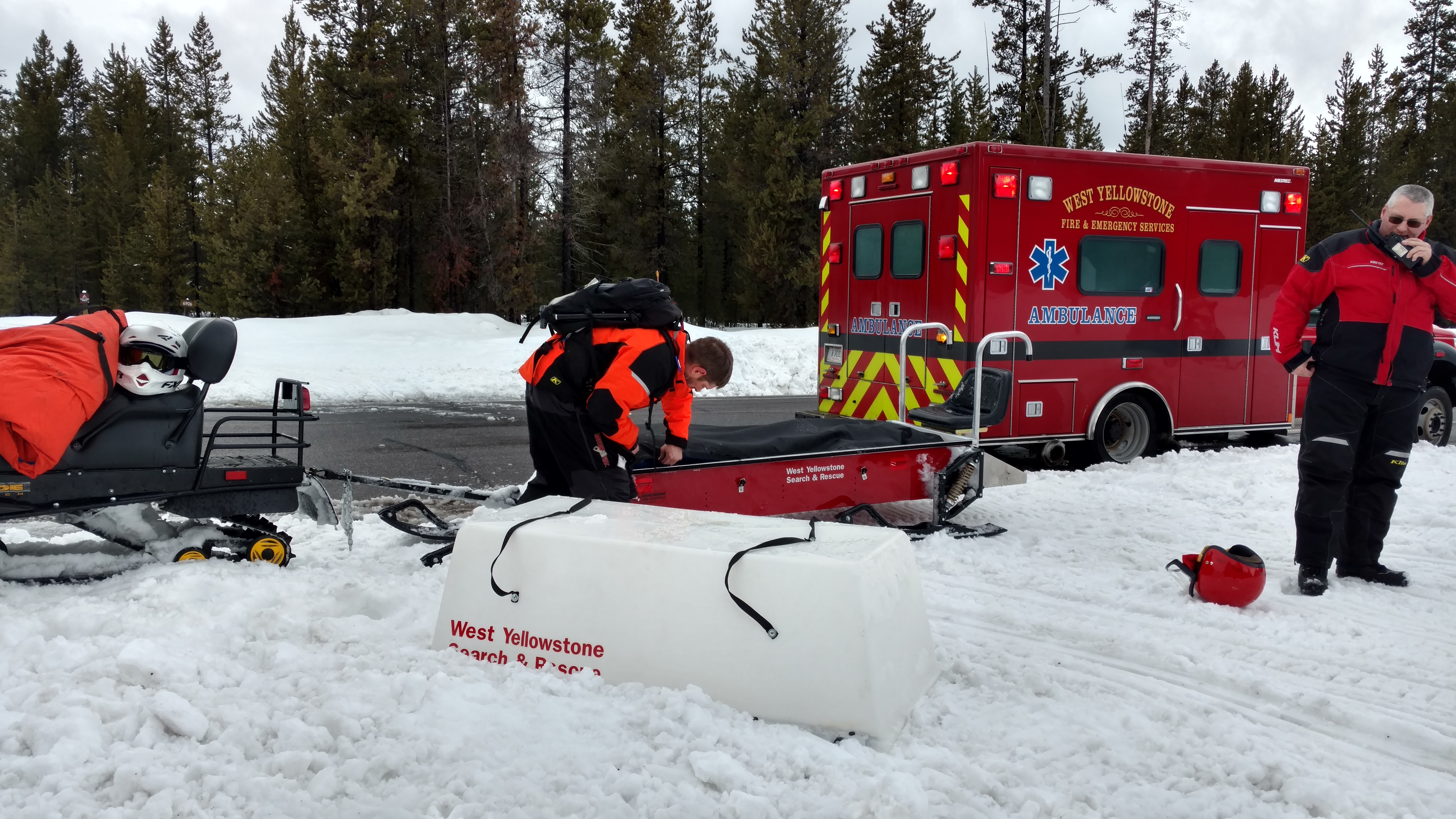 Sunday evening at 6:31 p.m., the West Yellowstone Police Department Dispatch center received a 911 call from a group of 7 snowmobilers who had gotten turned around and were unable to find their way back to West Yellowstone. The reporting party also indicated that one of the individuals in the party may be experiencing the beginning stages of hypothermia.

GPS coordinates retrieved from the 911 call provided a location of approximately 2 miles southwest of West Yellowstone in a canyon next to the South Fork of the Gallatin river.

Using the GPS coordinates, rescuers were able to locate the snowmobilers who had abandoned three of their snowmobiles after getting them stuck. All seven snowmobilers, who were wet and tired but otherwise uninjured, were escorted safely back to West Yellowstone.

Gallatin County Sheriff Brian Gootkin would like to remind snowmobilers that proper equipment and a thorough understanding of the area you’re entering are paramount to having a safe, enjoyable trip.  Respect the rapidly changing weather conditions and time. Visibility can easily be substantially reduced making it easy to become disoriented.  A basic survival kit containing food and water can save your life should you become lost.

(Bozeman, Mont.) The Gallatin County Sheriffs Office,  Bozeman Police and Fire Departments are instructing “Run, Lock, Fight” training for employees of the Law and Justice Center campus at the Law and Justice Center all day today.  The training is to prepare employees for an armed intruder situation.  Training scenarios will be conducted early afternoon.  The volatile situations that the building attracts and the security design challenges of an old, remodeled school make this type of training very important.    For more information contact Captain Shane Frantz at 406 580-4823

The snowmobiler, a 62 year old woman from Florida, had sustained a lower back injury when the snowmobile she was a passenger on went over some large bumps causing her to lose her balance and be impacted vertically by the snowmobile.

Rescuers arrived on scene and quickly packaged her onto a rescue sled. She was transported to a waiting Hebgen Basin Fire Department ambulance and transported to the Big Sky Medical Center in Big Sky.

Gallatin County Sheriff Brian Gootkin would like to remind snowmobilers that passengers should be carried only on snowmobiles designed for two passengers, which have a longer seat behind the driver, as well as rear handgrips for the passenger. Always operate responsibly, at speeds which will allow safe maneuvering when avoiding obstacles on or off trail. 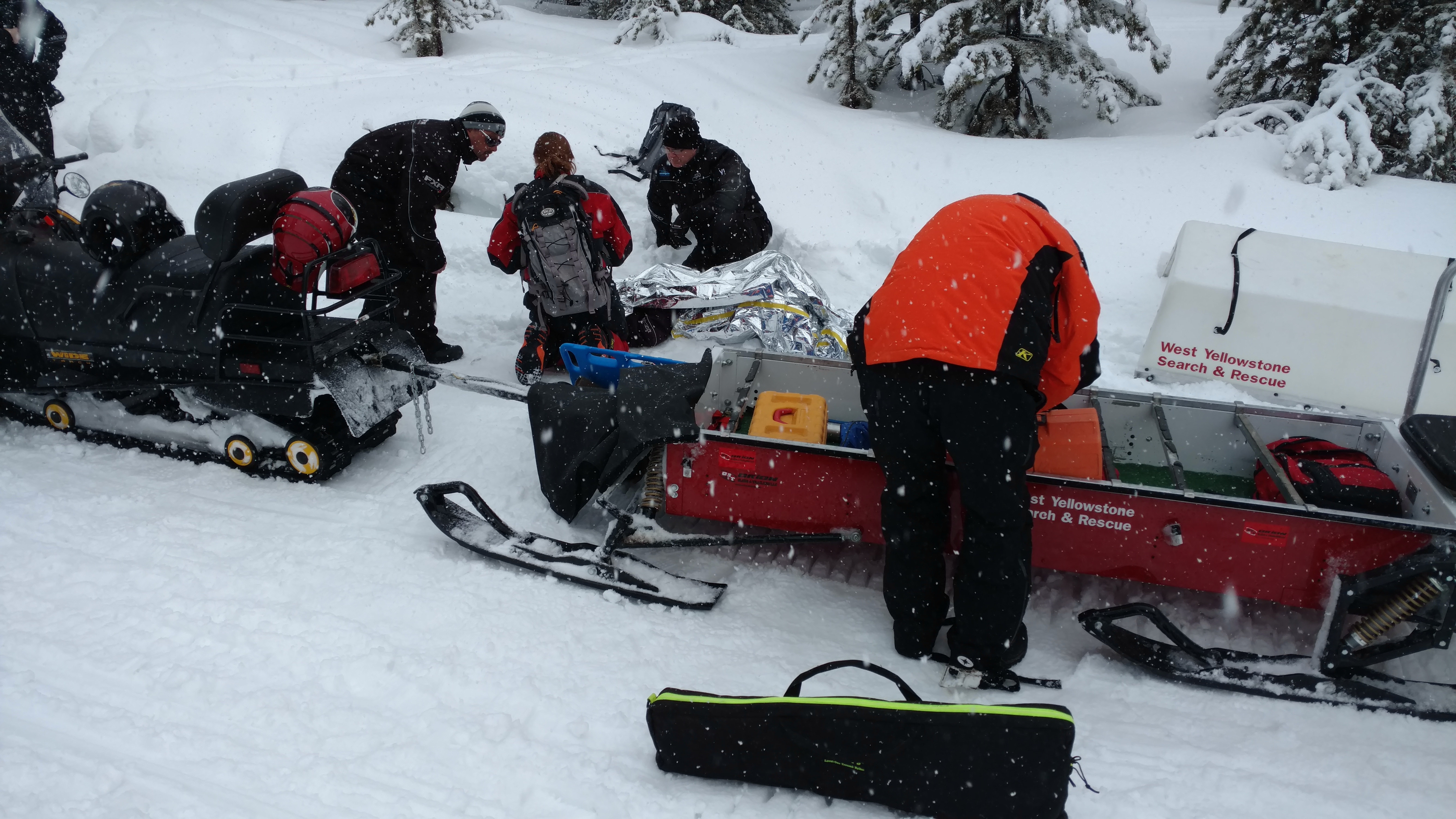 Tristin Carter was located Friday night in Casper, Wyoming and is safe. The Gallatin County Sheriff’s Office would like to thank all the people who assisted us in locating him.

Tristin Carter went missing from his residence in Belgrade, MT, on February 11, 2017. It is believed Tristin may be headed to Wyoming. It is unknown what clothing Tristin was wearing when he left his house but he was in possession of a backpack. Tristin may be in the company of an adult male, adult female or juvenile female. Tristin is listed as a missing person on the National Center for Missing and Exploited Children website.

Please keep an eye out for Tristin and notify the Gallatin County Sheriff’s Office at (406) 582-2100 Ext. 2, immediately if you see him. Please do not approach Tristin or notify him that you have called Law Enforcement.

This case is under Investigation and we will update you with changes.

On Tuesday, February 14, at 5:48pm, the Gallatin County Sheriff’s Office and Gallatin County Sheriff’s Search and Rescue responded to a backcountry search. A forty-five year old Bozeman man was riding a motorized snow bike with his two dogs in the area of the Little Bear Cabin when he became disoriented.  He used his cell phone to call for help when he could not find his way back to his truck.  Using software from the man’s phone, searchers were able to pinpoint the man’s location.  Rescuers then drove snowmobiles to his location and escorted him and the dogs back to his truck.

Sheriff Gootkin would like to point out a couple factors that helped ensure this was a successful search and rescue event.  The man carried a means of communication with him and called for help when he ran into trouble.  The man also stayed in one place as directed by searchers, even though the weather was cold and darkness was setting in.  This ensured searchers could maintain communications with him and that he did not end up in further trouble.  Sheriff Gootkin would also like to remind people to be prepared to stay in the backcountry for the night no matter the time of year.