The Gallatin County Sheriff’s marine enforcement deputies will be patrolling Hebgen Lake August 5th, 14th, 19th, and September 4th and 7th. We will be doing our best to ensure people’s safety by looking for boat operators that are under the influence of drugs or alcohol (also known as BUI).  Deputies will also be checking campgrounds and monitoring use activity around Hegben Lake during these patrols.

Gallatin County’s increased patrols will serve to educate the increased number of users on Hebgen Lake as well as provide an opportunity to inspect all vessels for the state required boating equipment.

A boat operator with blood alcohol content above the legal limit puts everyone on the water at risk of being involved in a boating accident. When impaired by alcohol or drugs, boating accidents are likely, and most are deadly for both passengers and boat operators, many of whom capsize their vessel or simply fall overboard.  For this reason impaired boaters can expect penalties to be severe.

Sheriff Brian Gootkin reminds boaters that education and enforcement are key factors in staying safe on the water.  We want boaters to enjoy themselves, however there will be zero tolerance for BUI.  Please take a look at the State of Montana regulations at http://fwp.mt.gov/recreation/regulations/boating/

Information on the Cabin Gulch Fire is now available at http://inciweb.nwcg.gov/incident/4400/.

The wildfire currently visible from Bozeman is the Cabin Gulch Fire.  This fire is burning in the Cabin Gulch Area off HWY 12 East of Townsend.  The fire is currently way North of the Gallatin County line burning on private and forest service lands.  More information when available.

A press conference will be held today (Thurs. July 16th) at 3:00 p.m. at the Gallatin County Detention Center, Community Room, to update the media on the investigation into the missing person case regarding Dr. Patrick Fitzpatrick.

On July 8th, deputies were dispatched to Bozeman Deaconess Hospital for a 23-year old  male with a gunshot wound of the abdomen. The investigation determined the victim had been playing with the gun by spinning it around on his finger. The weapon fired, striking him in the abdomen. Witnesses on scene drove the man to the emergency room. The victim did not sustain life-threatening injuries.

(Bozeman, Mont.)  The search for 74 year old Dr. Patrick J. Fitzpatrick of Bismark, ND entered it’s 5 day Wednesday.  Gallatin County Sheriff Brian Gootkin stated that up to  5 dogs teams,  7 ATV crews, ground searchers, helicopters and air planes using high tech cameras have been unable to locate this missing man.  He was last seen in Bozeman Friday July 3rd and his vehicle was discovered abondoned south of Willow Creek on Saturday July 4th.  The Madison County Sheriff and Search and Rescue have joined the effort searching the area around the town of Harrision and the reservoir.  The tip that lead to the Harrison search was a result of media coverage.  Sheriff’s Detectives continue to piece together his movements and attempt to develop leads.  The active search south of Willow Creek has been put on hold until addtional clues can be obtained.  Sheriff’s Search and Rescue Commander Lt. Jason Jarrett stated that “Rescuers searched to such a degree we are confident  he is not in that area.  We use our experience, lost person behavorial data and topography t0 predict probable and possible search areas.”

Included in this release are photographs of Fitzpatrick taken July 3 in Bozeman and a photgraph of his vehicle.  A flyer for public distribution is attached. ##### 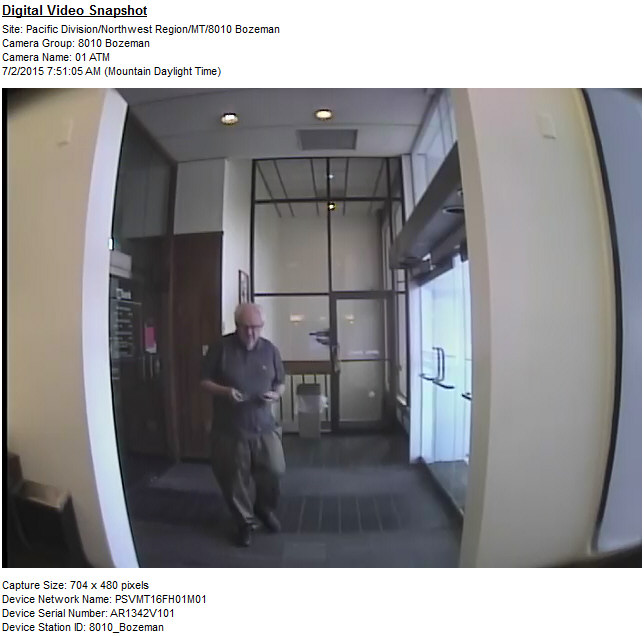 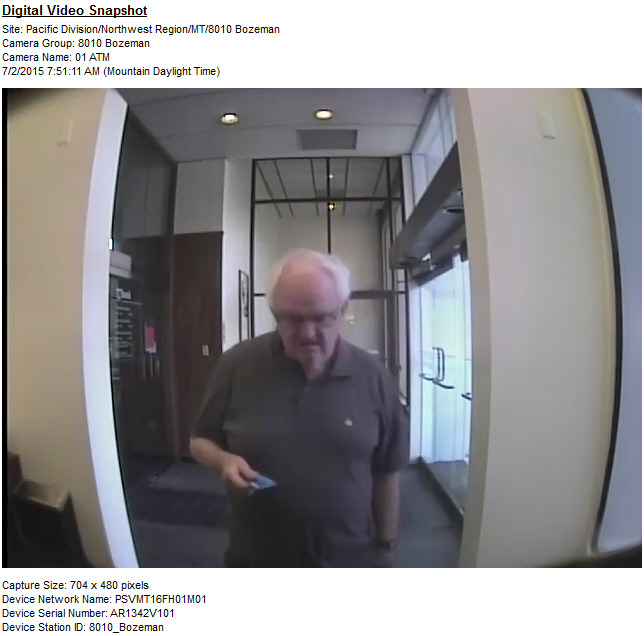 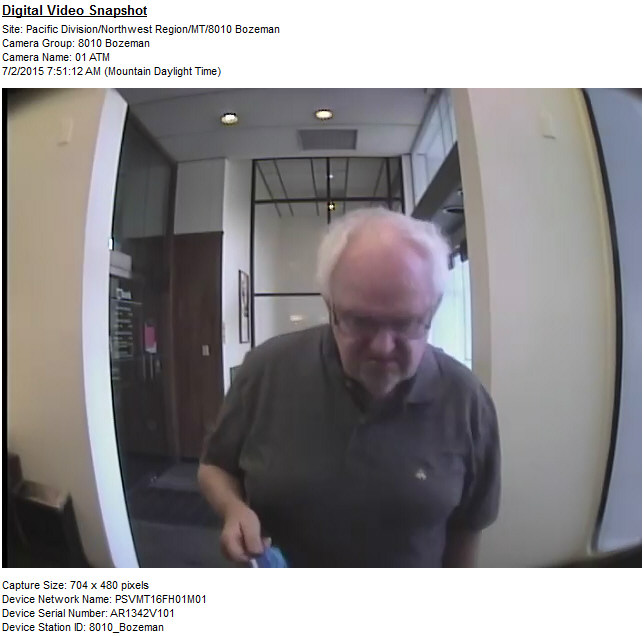 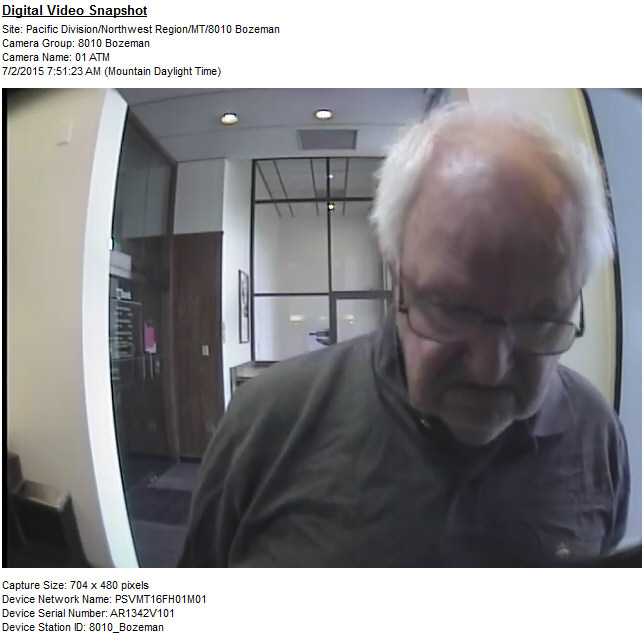 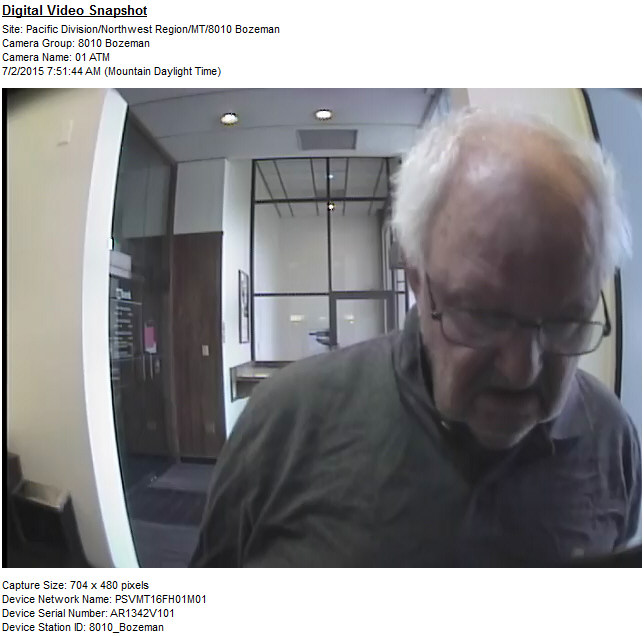 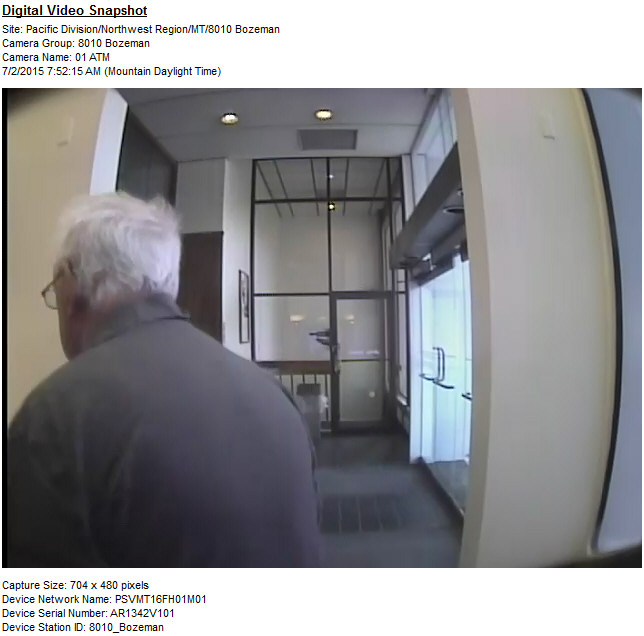 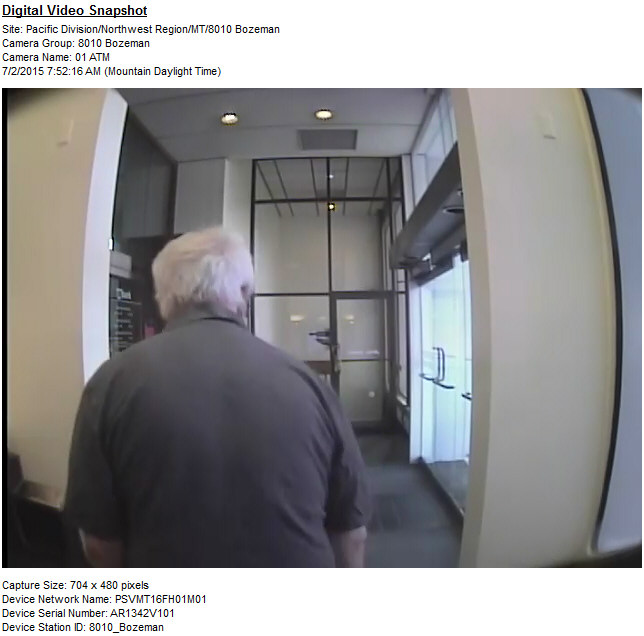 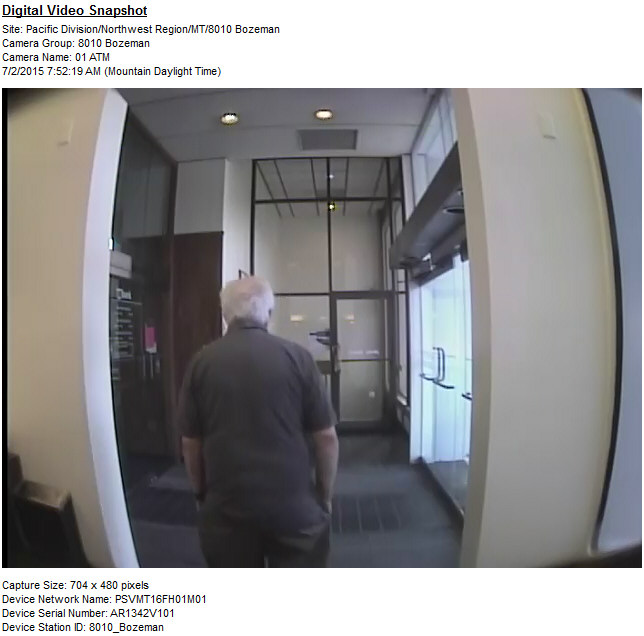 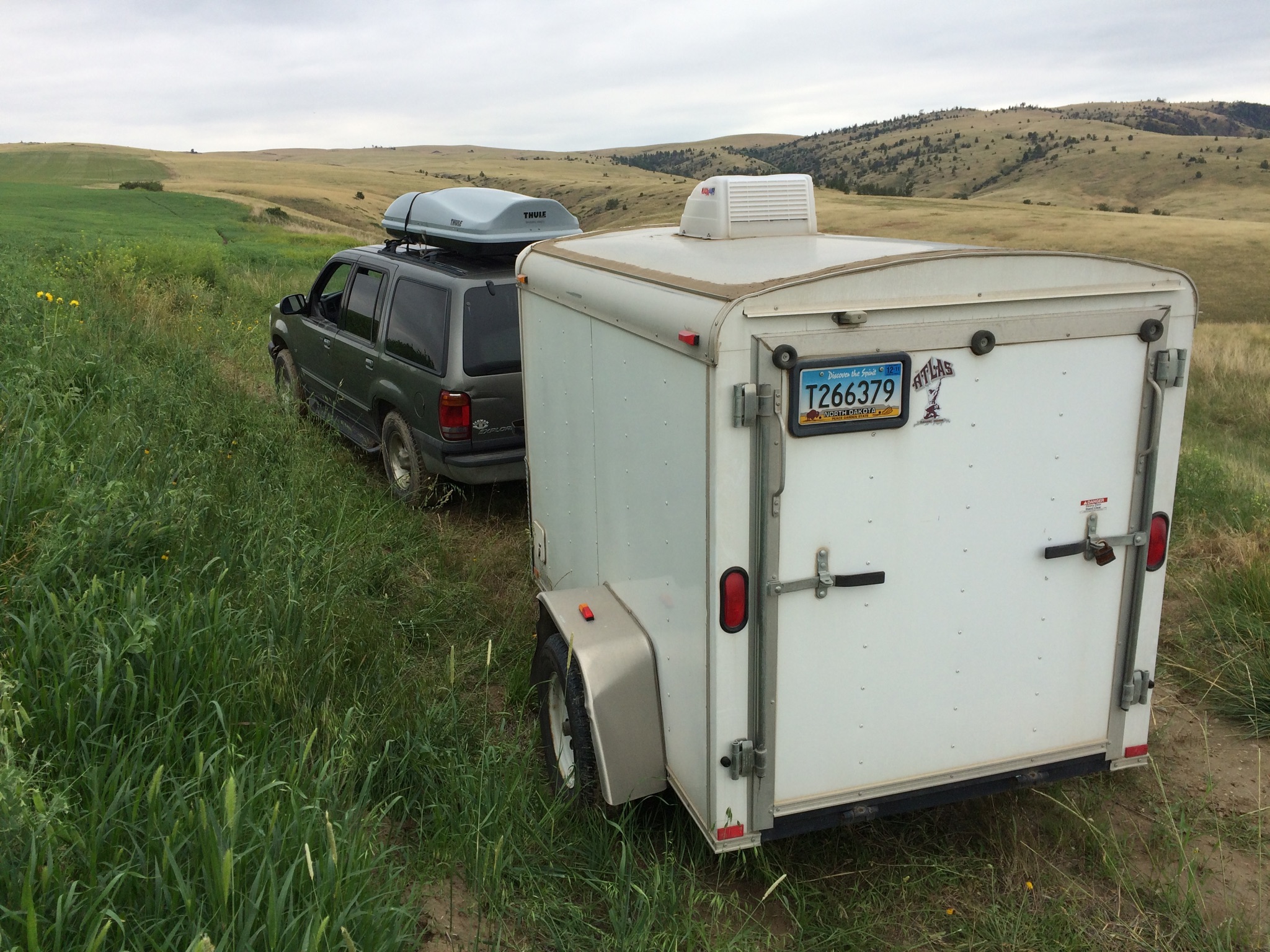 (Gallatin County, Mont.) The evening of Tuesday, July 07, 2015, continued the busy weekend for the members of Gallatin County Sheriff’s Search and Rescue. Rescuers responded to two back country searches. The second search was initiated within minutes of the conclusion of the first search.

Around 6:56 pm a man called Sheriff’s Deputies concerned about his 56 year old mother. She had left home to go to the grocery store several hours earlier and had not returned. When he called her she did not know where she was and seemed confused. Responding deputies and dispatch were able to narrow down the woman’s location by having her call 911 from her cell phone. As search and rescue members were heading to the area to search for the woman, deputies were able to locate her via voice communication. The woman had left her vehicle and attempted to walk through an extremely swampy and wet area south of Reese Creek Rd. The woman had sunk into the mud to a point she could no longer move. She was in the middle of thick brush and trees and could not be seen until deputies walked within yards of her. However, the mud was so deep that deputies could not get her out. She was suffering from being too cold as she was sitting in water as well as being stuck in mud. The weather also turned for the worse when a rain and lightning storm moved into the area.

Search and rescue members battled thigh deep mud to get to the woman. They used ropes, a litter, and plenty of manpower to get the woman safely out of the area. She was transferred to a waiting AMR ambulance for transport to Bozeman Deaconess Hospital.

Around 9:52 pm, a 45 year old male called for help. He was riding his mountain bike on the Bear Canyon Loop when he became lost. Responders were able to get a tentative location of the man from the information his cell phone provided to dispatch when he called 911. He was on a trail approximately three miles southwest of the closed gate on Goose Creek Rd off of Trail Creek Rd. Radio operators relayed messages between the man via text messaging and responding rescuers via radio. Rescuers initially travelled towards the man’s location with vehicles. They had to repeatedly stop to clear deadfall from their path. Later, mud and terrain made rescuers switch to travelling by foot.

The lost man carried a whistle with him that aided rescuers in locating him. Around 1:05 am rescuers made contact with the lost man and escorted him back to their waiting vehicles. They helped warm him up and gave him a ride out of the area. Rescuers turned the man over to a waiting deputy for transport back to his car at the Bear Canyon Trailhead.

Sheriff Brian Gootkin would like to remind people to always carry a means of communication. The lost persons’ cell phones in these two cases provided vital location information that ultimately helped lead to their successful rescues.

Gallatin County Sheriff’s Search and Rescue is a completely volunteer group that works under a sworn deputy on search and rescue missions. The members are experts in a variety of disciplines related to search and rescue. Members from the various Gallatin County Sheriff’s Search and Rescue Divisions can respond to incidents under water to the highest remote alpine locations regardless of weather conditions, time of day, or season of the year.

Autopsy results determined that 24 year old MSU graduate Eryon Barnett died as a result of complications from pancreatitis. Barnett was hospitalized in Bozeman for a recent flare up of pancreatitis when he died suddenly on July 4th.#####

(Gallatin County, Mont.)  The Sheriff’s Office Search and Rescue team is currently search for a 74 year old North Dakota Doctor.  His vehicle and trailer were found next to a pea field south of Willow Cr on Saturday.  Missing is Dr. Patrick J. Fitzpatrick of Bismark ND.  The investigation indicates that he could have abandoned his vehicle as early as Friday afternoon.  He is described as 6’0″ tall and in excess of 220 lbs.  He has white hair and a goatee.  He speaks with an Irish accent.  Clothing description is unknown.  If anyone has seen or has information regarding Dr. Fitzpatrick please call the Sheriff’s Office at 406-582-2100.  Photographs attached. 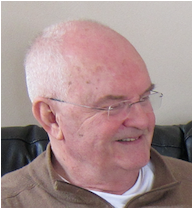 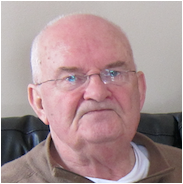 (Bozeman, Mont) The Sheriff’s Office engaged in a search for a missing 12 year old boy this afternoon.  He was last seen in the area of the Museum of the Rockies at about 3:00 p.m. and located at 5:30.  6 Deputy Sheriff’s, Sheriff’s Search and Rescue assisted by MSU Police, Bozeman Police and the RaeSourdough Fire Dept. were involved with the Search.  The boy was missing from the area south of Goldenstein on South 3rd and had been missing since around noon.  The boy in this case decided to stop at a fire station, in this case at Rouse and Main, until someone found him.  Sheriff Gootkin says “Missing kids are always scary for parents.  We encourage parents to call us early so we have the best chance of finding them early.  Besides deciding to walk away from home this kid did good by going to a fire station.”