Bozeman, MT –The Custer Gallatin National Forests has confirmed one fire in Hyalite, in the vicinity of Lick Creek, north of the trail, Resources are enroute including a full load of smokejumpers and Engine 661 with two firefighters, from Bozeman Ranger District are hiking into the fire.  The fire is located along the ridgetop burning in timber. 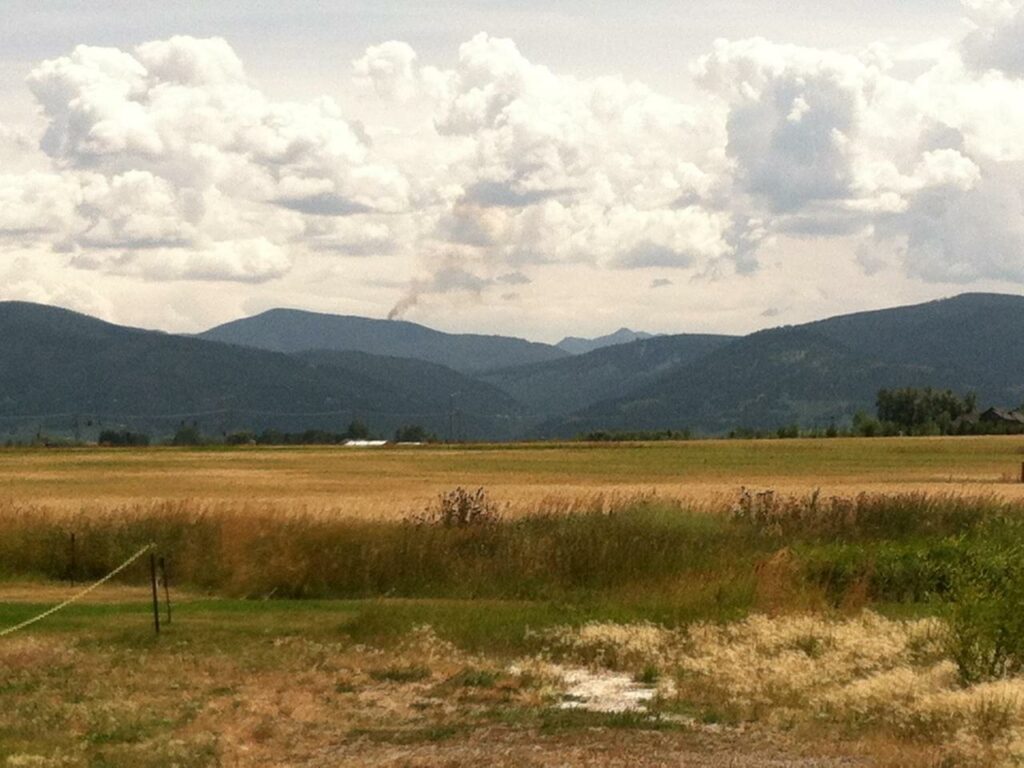 Residents in several fire districts in the Gallatin Valley will not be able to activate burn permits starting this week. As of Tuesday, July 29, 2014, Central Valley, Three Forks, Willow Creek, Clarkston, and Gallatin River Ranch have closed their fire districts to any open burning that requires a burn permit.

As the weather continues in a warm and dry trend, fire officials are concerned that the fire danger is too high in some areas for residents to safely burn. Several fire districts are watching the weather closely and may be closing their districts to any burning that requires a burn permit. Permits are required in Gallatin County to burn natural vegetative material accumulated in a pile that is greater than four feet in diameter. Campfires do not require a burn permit.

Fire activity is starting to increase around the state and fire officials in Gallatin County urge residents to use caution with any open flame. At this time of year fires can spread quickly in dry fuels. Residents are encouraged to delay their open burning activities until the weather changes and to be aware that they may not be able to activate their burn permits during the remainder of the fire season. Permits can be activated at http://burnpermit.mt.gov if your fire district is still allowing open burning.

On July 29, 2014, at approximately 4:24 AM, Sheriff’s Search and Rescue was alerted for an urban search to assist the Bozeman Police Department in looking for an 80 year old male. Bozeman PD had received the report at about 4:00 AM, and had gathered the initial information and begun searching. The missing man had been staying with relatives at a residence on North 15th Ave, and was visiting from out of state for a wedding. He had last been seen at the residence on North 15th at about 12:30 AM.

Approximately 15 volunteers from Sheriff’s Search and Rescue responded to the call. Information was also passed to media outlets to solicit assistance from the public. As search plans were made to determine the search radius and areas of highest probability, handlers from Western Montana Search Dogs began searching using their K9s. At about 5:40 AM, an alert employee from Rocky Mountain Security called and reported that he had located the missing man near the intersection of Main Street and Yerger Drive.

The man’s identity was confirmed by Bozeman PD, and he was reunited with his family. He was in good condition, and did not require any further assistance. Sheriff Gootkin would like to thank Rocky Mountain Security, members of the media, Bozeman PD, and MSU PD for their collaboration with Search and Rescue. 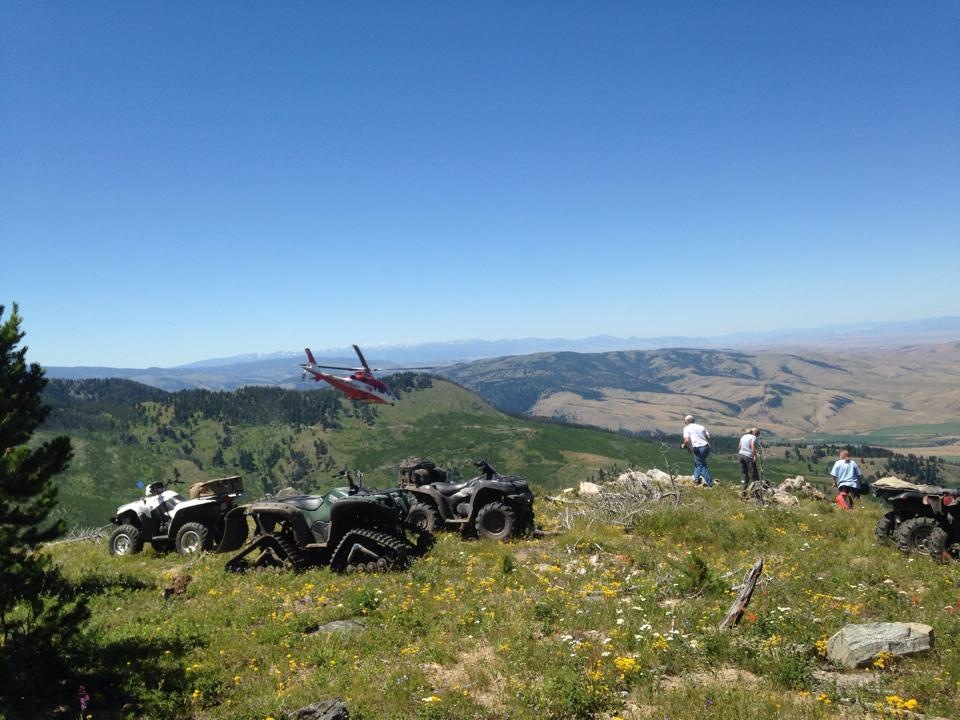 (Gallatin County, Mont.) Sunday a little after noon a 21 year old seasonal employee in the area crashed his mountain bike in Leverich Canyon south of Bozeman. He was 1 to 2 miles up the trail from the parking area and was able to call 911 using his cell phone. The man was able to give a good description of his location and his condition to rescuers who reached him in less than an hour. He was transported out of the hills using a specialized wheeled liter similar to what hunters use to haul out game. He suffered an injury to his right arm and shoulder from impacting a tree when he fell.

On Wednesday the 16th rescuers were sent to the area of Fairy Lake to search for a member of a party of 4 that had planned on skiing The Great One. Prior to finding the proper route one person of the party fell and fractured his arm and another member and his dog were stranded by terrain. The injured skier and the rest of the group left the area to go to the hospital where they contacted the Sheriff’s Office. Volunteer Rescuers from Sheriff’s Search and Rescue utilized a helicopter and ATVs to located and rescue the left over member of the party who had found a way off the mountain.

On July 16, 2014 at approximately 9:14 am, the Big Sky Fire Department, along with the Gallatin County Sheriff’s Office and the Montana Highway Patrol, were dispatched to Highway 191 at mile marker 40 south of Big Sky for a rollover single motor vehicle accident.  Arriving units found that all occupants had been helped out of the vehicle by bystanders.  The pregnant driver and her two young children were transported to Bozeman Deaconess Hospital by BSFD for treatment of minor injuries.  An accident investigation is being conducted by MHP. 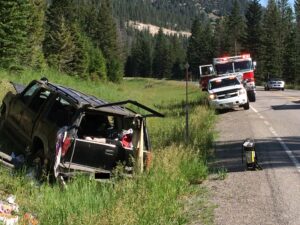 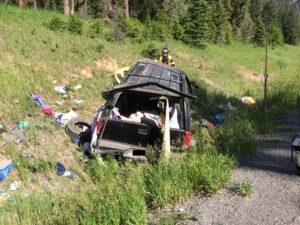 (Gallatin County Mont.) On Friday 07-11-14 at 1832 hours a 50 year-old male from Bozeman called 911 and reported he fell and injured himself, possibly breaking his collarbone, while mountain biking Moody Creek east and north from Stone Creek North of Bozeman.  SAR personnel responded with teams entering both Stone Creek and Olson Creek in an attempt to find the man. The first team left Stone Creek trailhead at 1955 hours. At 2019 hours Summit Air Ambulance was contacted to assist in locating the man from the air. Seven minutes after they lifted off the ground they spotted the injured biker. As there was not a satisfactory landing zone, they directed a ground team in who assisted the man down a trail to the SAR ATVs. Rather than ride down, the man chose to continue walking, with the assistance of a SAR member, to the main Stone Creek Road where an ambulance was stationed.  The man appeared to have suffered a broken collar bone. He refused transport from AMR and drove to Bozeman Deaconess Hospital in his own vehicle.

On Saturday, July 12th, at 10:19 am, the Gallatin County Sheriff’s Office, the Big Sky and Helicopter Divisions of Gallatin County Sheriff’s Search and Rescue, and the Big Sky Fire Department responded to a backcountry rescue on Buck Ridge south of Big Sky. A 22 year old male riding an ATV struck a tree approximately seven miles west of the Doe Creek trailhead. The impact caused significant injuries to the man’s head and upper torso. The man, who was in substantial pain, walked about half a mile from the scene of the collision before he collapsed. The man was found by other recreationalists who contacted the Gallatin County Dispatch Center by cell phone.

Rescuers and other recreationalists that observed the scene of the crash stated the man’s injuries would have been much more significant had he not been wearing a helmet with a face shield.

Sheriff Brain Gootkin would like to remind recreationalists riding in the backcountry to always ride within their skill level, wear the proper safety equipment, and ride in a group. Always carry a means of communication to summon help if you run into trouble.

(Greater Gallatin County Mont.) Starting Tuesday Deputies and SAR Volunteers have been active with outdoor recreation mishaps.  On Tuesday a 67 year old Bozeman resident was on a hike with other members of the Bozeman Senior Center in Middle Cottonwood Canyon when she tripped and fell, injuring her ankle.

Wendesday volunteers had the day off.

Thursday at 11:17 a.m. SAR responded to Leverich Canyon south of Bozeman for an 18 year old male injured in a moutain bike crash.

Thursday at 4:40 p.m. a Bozeman woman called 911 to report that she was lost in the Hyalite area. She had driven on Langohr Rd, parked and then hiked on game trails and old logging roads. Dispatch was able to retrieve GPS coordinates from her cell phone. Her phone put her location on the Cottonwood Ridge area not far from a logging road. Members from Sheriff’s Search and Rescue along with members of Rae/Sourdough Fire and the Deputies responded. As SAR was deploying the lost woman was located by a friend and escorted back to her vehicle. She was uninjured, just a little shaken up by the experience. Sheriff Gootkin would like to remind everyone that it is much safer to hike with a group, or with another person if possible. The backcountry can become very large and very scary when you are by yourself.

Thursday at 11:32 p.m., the 911 Center received the report of an emergency beacon activation near the Cabin Creek Cabin, which is north of West Yellowstone. Shortly thereafter there was a 911 call from a nurse who related that a 53-year-old female from Bozeman was injured in a horse accident and was at the Cabin Creek Cabin. Personnel from Sheriff’s Search and Rescue West Yellowstone Division responded. Hebgen Basin Fire Department assisted with the rescue. Air Idaho, which is a life-flight helicopter from Idaho Falls, also responded. When the rescue team arrived at the scene they assessed the patient who had suffered serious injuries from the accident. The patient was packaged onto the life-flight helicopter and flown to the Eastern Idaho Regional Medical Center in Idaho Falls, Idaho.  Sheriff Gootkin would like to remind recreationalists that this incident highlights the importance of having a reliable communication device such as the one used in this case so that search and rescue professionals can quickly respond to a backcountry emergency.

Friday at 6:30 p.m. Rescue Crews from the valley spend the evening in the Bangtails North and East of Bozeman.  A 50 year old male had crashed on his mountain bike between Stone Creek and the Bangtail Divide.  It took SAR Volunteers about 3 hours to reach the biker sending rescuers in from both Olsen Cr and Stone Creek.  Although riding a moutain bike into Stone Cr. is fairly easy, locating and bringing someone out that can’t ride that same bike is much more difficult.

On Saturday at 10:19 a.m. Sheriff’s SAR units from Big Sky responded to Doe Cr for an injured ATV rider about 6 1/2 miles from the highway.  That person was flown by Summit Air Ambulance after being accessed by SAR teams.

The Gallatin County Sheriff’s Office Coroner has identified the female victim in the fatal car accident on July 10, 2014, at approximately 09:45 a.m. as 36 year-old Bhu Sullivan. Sullivan’s vehicle was struck in the driver’s side.

Sullivan’s five year-old daughter was in the vehicle and was transported to Bozeman Deaconess Hospital with minor injuries.  The driver of the other vehicle, a crane, was not injured.