(Gallatin County, Mont.)  On Saturday December 29, 2018 at 9:30 am, the West Yellowstone Police Department Dispatch received a 911 call reporting a snowmobile crash on the Two Top Trail, approximately 8 miles west of West Yellowstone. The injured party, a 26-year-old man from North Carolina, had sustained a major head and face injury when the snowmobile he was riding on left the trail and crashed into a tree.

Rescuers met the injured party at the scene of the crash approximately forty-five minutes after the initial call for help.  The injured man was conscious, but not alert and unable to verbally respond to rescuers.  The man had major facial contusions and a significant head injury.  Due to heavy snow and wind, rescue personnel were unable to launch a rescue helicopter.  The patient was treated on scene by paramedics, placed in a specialized rescue sled, and transported to a nearby location to meet an ambulance crew.  The ambulance then transported the patient to Eastern Idaho Regional Medical Center. 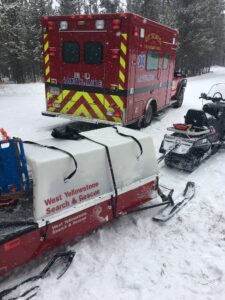 Search and Rescue makes 3rd Rescue for the Weekend Saturday in W. Yell

Press Conference to be Scheduled for Thursday