Shortly after 12 PM on Tuesday, February 27, the Bridger Bowl Ski Patrol received a report of an 18 year old male snowboarder that had made a navigation error and ended up stuck at the top of a cliff on the west side of Saddle Peak.  Saddle Peak is outside of the Bridger Bowl Ski Area. The Burlington Vt. man’s friend went for help, and Sheriff’s Search and Rescuer skiers reached the site before 1 PM. They found him clinging to a tree at the top of an approximately 150 foot high cliff. The decision was made to set up a rope system and lower him to the bottom of the cliff.  By 1:30 he had been lowered and was escorted back to the ski hill by Bridger Bowl Ski Patrollers.  The man and was unfamiliar with the out-of-bounds route that he took. Fortunately, he was not injured.

Sheriff Gootkin would like to remind recreationists to familiarize themselves with the areas they intend to visit, and to bring appropriate equipment to ensure a safe and enjoyable day.

(Gallatin County, Mont.)  On Thursday February 22, at 10:40 am., the West Yellowstone Police Department Dispatch center received a 911 call reporting a snowmobile crash on the Two Top Trail 8 miles southwest of West Yellowstone. The injured party, a 71-year-old female from Washington, had sustained knee and rib injuries when the snowmobile she was a passenger on left the trail and crashed into a tree.

The woman was traveling with three other members of her family, including a physician.  After an initial assessment of her injuries, rescue personal applied an air compression brace to her leg and placed her inside a specialized rescue sled for transport off the mountain.  She was transported to an ambulance in town, then taken to Big Sky Medical Center for further evaluation and treatment. 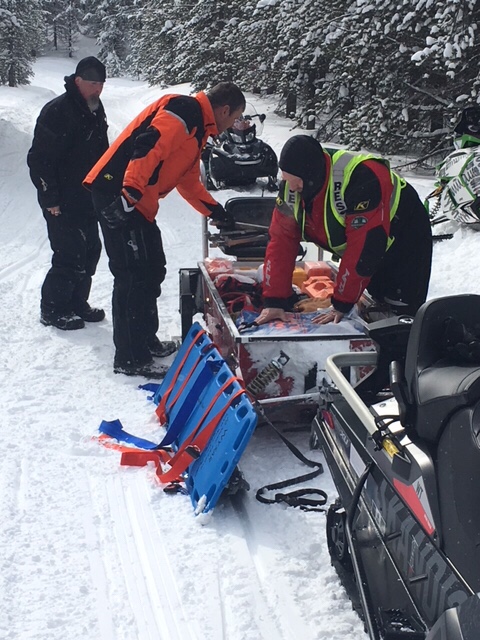 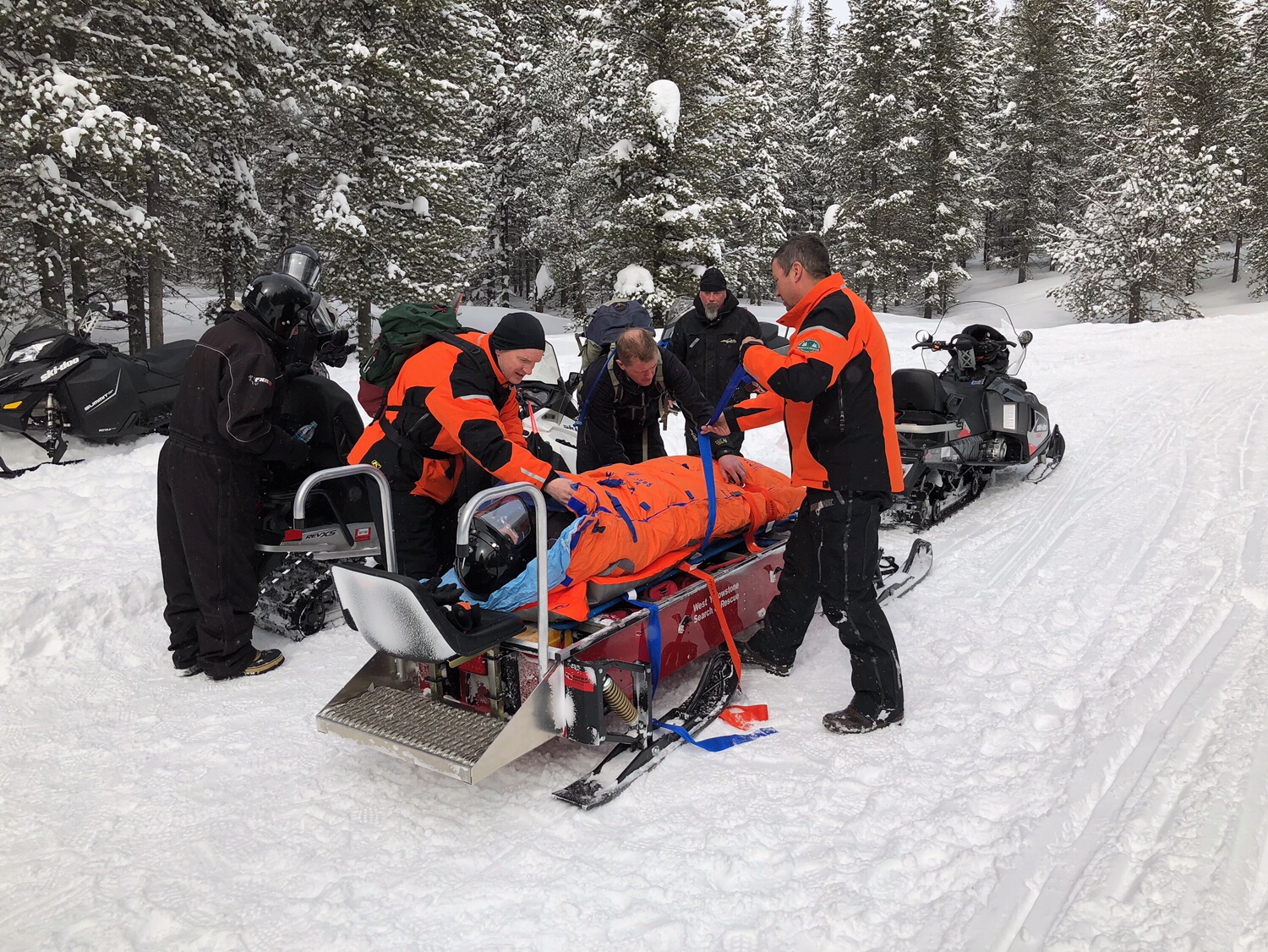 On February 20, 2018 at approximately 4:33 p.m. West Yellowstone Police Department Dispatch received a 911 call from a snowmobiler reporting that he and three others had become turned around while snowmobiling in a deep canyon somewhere near Lion’s Head Mountain  approximately 13 miles west of West Yellowstone. The snowmobilers reported that they were stuck, tired, cold and unable to find their way out of the deep ravine.

Rescuers from the Sheriff’s Search and Rescue in West Yellowstone, Yellowstone National Park and the U.S. Forest Service responded to assist with the rescue.

While rescuers were trying to find their way into the ravine through steep and technical terrain, the reporting party contacted dispatch and indicated that three members of his party riding snowmobiles had left him and headed out to the trailhead. He indicated, however that he was still stuck, had a broke down timber sled and was now alone. The snowmobiler had started a fire and was waiting for rescuers to get to him. The three snowmobilers were located at the trailhead by a Yellowstone National Park Ranger a short while later. They indicated that they had planned on contacting Search and Rescue when they got out to the trailhead.

While speaking with the three snowmobilers, from Appleton Wisconsin, the Ranger was approached by a second group of snowmobilers from Minnesota who indicated that a rider in their group had discovered the stranded snowmobiler however had been unable to get down to his location. Several members of that group went back into the ravine to assist him in getting out.  A short while later, the Minnesota group returned with the snowmobiler. They had managed to reach the stranded snowmobiler and assist him out of the ravine. The stranded snowmobiler, a resident of West Yellowstone later indicated that due to the deep snow and technical steep terrain, along with mechanical problems, he had been forced to leave his machine in the ravine with plans to return later and retrieve the machine.

Gallatin County Sheriff Brian Gootkin would like to remind snowmobilers to stay with your group and avoid leaving anyone behind. The harsh weather combined with severely cold temperatures could easily spell disaster for someone left out alone. Staying in a group in this case would have proven invaluable to the rescuers by providing better direction and ease of locating the stranded snowmobiler.

Monday at 2:15, a 19 year man from Bozeman skied off a jump in Beehive Basin and wrecked. He was unconscious for 30 seconds to a minute. When he came to he was confused and at times combative towards his friends two indicators of a serious closed head injury. A friend in the group was able to call 911 on his cell phone. A medical helicopter from Air Idaho and a back country rescue helicopter from Sheriff’s Search and Rescue were launched along with a ground team from Sheriff’s Search and Rescue in Big Sky. The medical helicopter was able to land near the skier so the rescue helicopter was not needed.  He was transported to the Big Sky Bozeman Health Medical Center.

Sheriff Brian Gootkin would like to remind backcountry skiers to use caution when in the backcountry. Tell people where you are going and when to expect you back.  Enjoy the backcountry with other people when possible and carry a means of communication with you.

Tuesday at 12:33 p.m. West Yellowstone Police Department Dispatch received a 911 call from a snowmobiler reporting that his wife had tipped her snowmobile over on the trail. The 49 year old female from Hamilton Montana, had suffered a possible broken collar bone when the snowmobile she was riding overturned on a corner , ejected and rolled over her.

She was located on the Madison Arm Trail  5 miles north of West Yellowstone. The injured snowmobiler was loaded onto the passenger seat of a tracked four wheeler and transported safely to rendezvous with a waiting Hebgen Basin Fire Department Ambulance.

Gallatin County Sheriff Brian Gootkin says snowmobilers need to be alert for changing trial conditions and operate at a speed that will allow them to remain in control of the machine. Recent warm weather combined with rain and sleet has created rough and icy conditions on the trail systems. 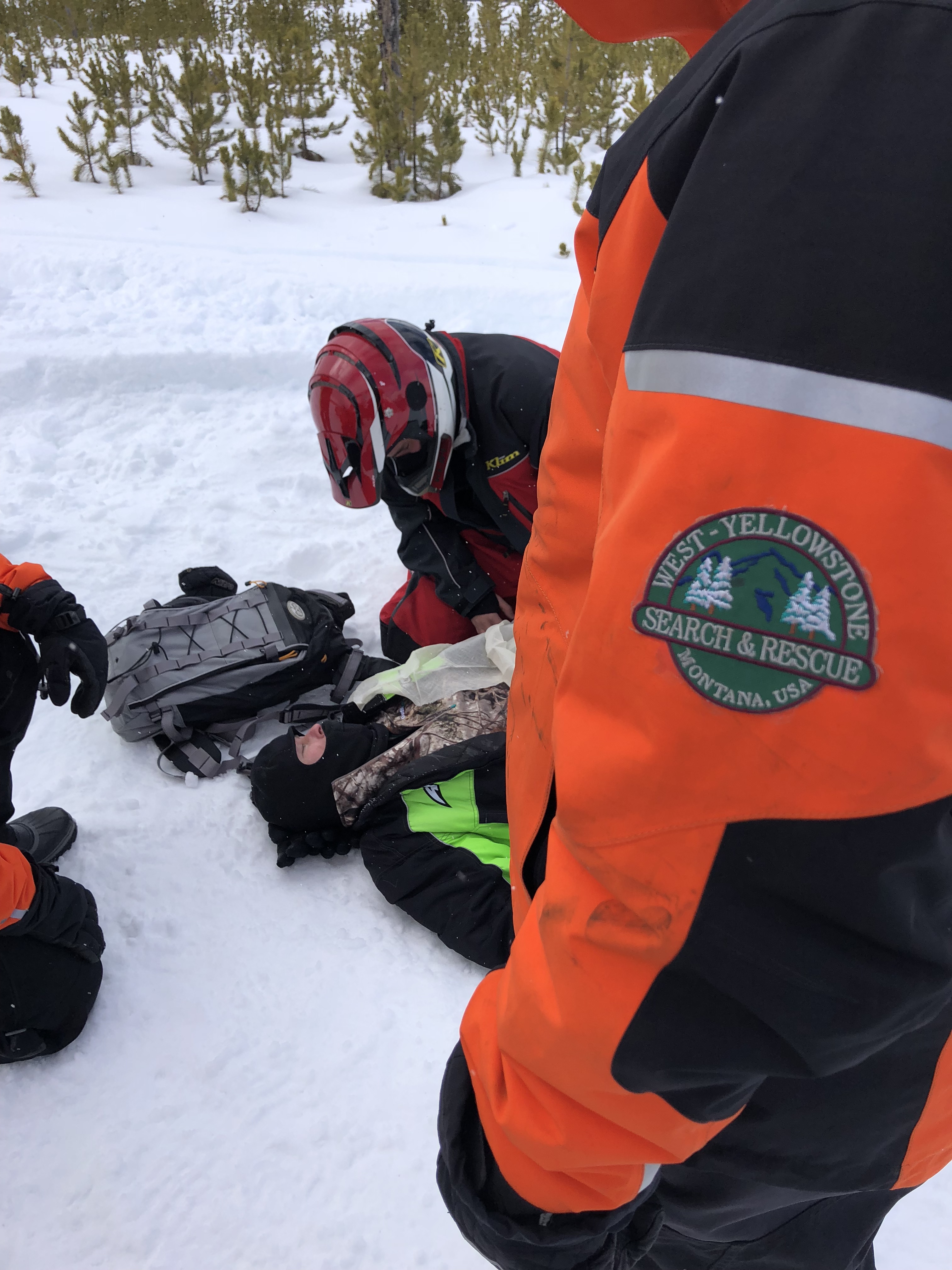 On 02/01/2018 at 11:13 a.m. West Yellowstone Police Department Dispatch received a 911 call from a snowmobiler reporting that his wife, a 53 year old female from Jacksonville Florida, had been injured in a single snowmobile crash.  She had suffered a broken arm and possible dislocated shoulder when the snowmobile she was riding went off the trail and struck a tree.

Rescuers located the injured snowmobiler approximately 6.2 miles west of West Yellowstone using GPS coordinates retrieved from the 911 call. They loaded her onto a rescue sled and transported her to a waiting Hebgen Basin Fire Department Ambulance.

Gallatin County Sheriff Brian Gootkin would like to remind snowmobilers to ride cautiously while keeping a sharp eye out for changing trail conditions. Heavily used trails tend to become rough and unpredictable. Travel at a speed slow enough to allow you to properly steer your machine away from any obstacle. 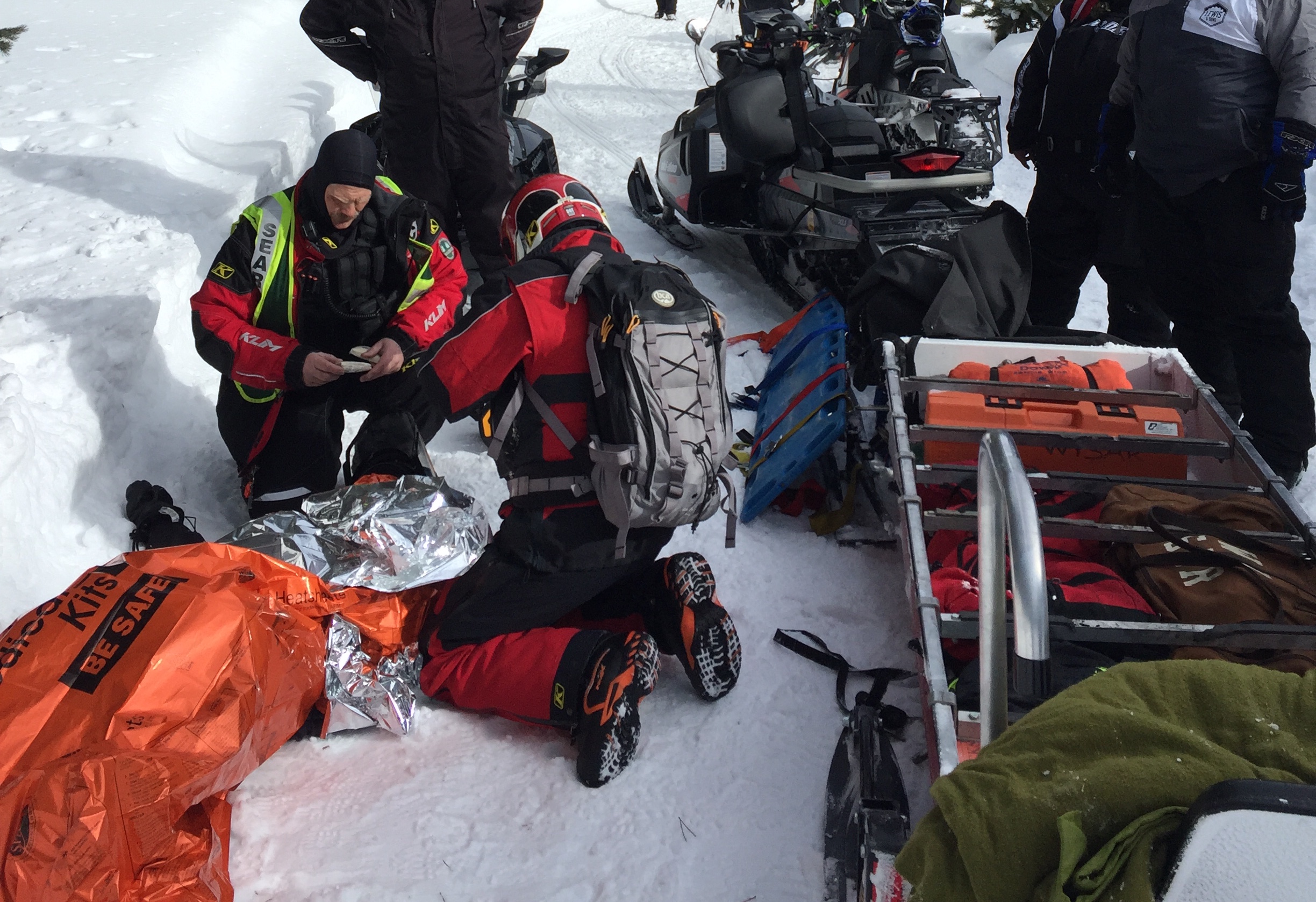 Want to make a real splash?  Join us for the 16th Annual President’s Plunge for Special Olympics Montana.  President’s Day Weekend Saturday February 17th 2018 at 12 PM.  Brave souls with warm hearts will plunge themselves into the icy waters of the East Gallatin Rec Area off Manley Road in Bozeman to raise funds and support for our Montana Special Olympics athletes.  Parking is limited.  There is free parking at the Gallatin County Fairgrounds with a shuttle running from 10AM to 2PM.

We’ll have crazy costumes, prizes, Chevy truck raffle tickets and the all-important hot tub.  Don’t be left out in the cold.  Grab friends, family and co-workers and get out there.  Take the plunge yourself or just come out to cheer.

For more information or to register go to www.somt.org/plunge.