(Gallatin County, Mont.) Sunday at 11:30 AM Gallatin County Search and Rescue responded to Bridger Bowl for a report of a woman who fell off a horse. The 50 year old Bozeman woman was riding with a friend south of Bridger Bowl on U.S. Forest Service property.  Her horse got spooked and she got bucked off.   She sustained a severe head injury when she landed. Her partner was able to call 911.

Volunteer Rescuers from Sheriff’s Search and Rescue, AMR Ambulance, and the Bridger Canyon Fire Department were able to reach the woman by vehicle and four wheelers. She was transported to a landing zone where Reach Air ambulance assumed care. The woman was flown directly to Billings hospital.

Sheriff Gootkin would like to remind all outdoor enthusiasts that an accident in the backcountry can be a complicated affair and take a long time for rescuers to reach you and give treatment. Today, the woman was extremely lucky her friend was able to get cell service to call 911. There are many parts of the county where calling for help on a cell phone is not an option.

(BELGRADE, Mont.) Please disregard the request to identify/locate the individuals wanted for questioning, as mentioned in our July 20th release.  These persons have been identified.  This case is active and under investigation and no further comment can be made at this time. The Belgrade Police Department wishes to extend its most sincere gratitude to all who assisted us with this matter.  We are fortunate to have such helpful and cooperative citizens in our community.

(Gallatin County, Mont.) Tuesday at 12:54 P.M., the Gallatin County Sheriff’s Office received a report of a 58-year-old male injured in a fall from a horse on Buffalo Horn Creek Trail South of Big Sky. The rider was with others on a guided horseback tour. The guide was equipped with a satellite phone enabling them to call for assistance from search and rescue.  The party was 1.5 miles up Buffalo Horn Creek Trail when the patient fell, hurting the left side of his hip. Members of the Gallatin County Big Sky Search & Rescue and Big Sky Fire/Ambulance were dispatched.

The horseback group did have water and some other equipment to aid the patient during the wait until Search & Rescue could arrive. Rescuers from Gallatin County Search & Rescue at Big Sky were able to provide needed aid and safely transport the injured man out to the trail head where he was reunited with family.

At 8:22 p.m., County Dispatch received a 911 call from a lost hiker, a 22-year-old male from Oklahoma. Coordinates retrieved from the 911 call indicated that the hiker was near the head of Beehive Basin in the area of Spanish Lakes. Although he was uninjured, the hiker had become disoriented, had no survival gear, had minimal clothing and his cellphone battery was extremely low.

After searching the area surrounding the gps coordinates, the helicopter was unable to locate the lost hiker because he kept going after making the 911 call.   A short while later, the hiker was located by security personnel on Jack Creek road, tired and thirsty but otherwise uninjured.

Gallatin County Sheriff Brian Gootkin would like to remind hikers that even a short trip can quickly turn dangerous if you are unprepared. Make sure you have proper survival gear, clothing, food and water.

At 11:15 P.M.  the Gallatin County Sheriff’s Office Search and Rescue Team responded to Bridger Ridge for a back country rescue. Three women were hiking from Flathead Pass to the “M” Trailhead via Bridger Ridge. They began hiking around 6am.  At approximately 8pm, when they were in the vicinity of Bridger Bowl, one of the party began to feel nauseous and started vomiting.  Shortly after 11pm, the hikers called for help.

Gallatin County Search and Rescue HAM radio operators, Posse, and RAT team members staged at the “M” trailhead and hiked up the trail where they met the hikers. EMTs assessed the patient and the sick hiker was transported down to the trailhead in a one-wheeled litter.

The hiking party was well prepared for their hike and had ample food and water as well as headlamps for travel after dark. Yesterday’s high temperatures and the exposed rugged terrain of the ridge were major factors in the hiker becoming ill.

The railroad crossing located immediately South of the intersection of Main Street and South Broadway in Belgrade will be closed to all traffic for improvements from the morning of Thursday the 21st to the evening of Friday the 22nd.

On July 5, 2016, the Gallatin County Sheriff’s Office, Montana Highway Patrol, Belgrade Police Department, Central Valley Fire Department, American Medical Response, and REACH Helicopters responded to a one vehicle rollover on Dry Creek Road near the intersection of Penwell Bridge. The male passenger and registered owner of the vehicle was not wearing his seat belt and was ejected from the vehicle as it rolled. He was declared dead on scene. The deceased was identified as Michael Allen Aragon, 48 years of age. Mr. Aragon had moved to Belgrade from Idaho approximately a year prior and worked in Bozeman.

The female driver, who remains in critical condition, still has not been identified.  She is described as 25-40 years of age, 5’ 5” tall, 158 pounds, dyed blond hair with a possible pink streak and hazel eyes. She has multiple tattoos on her body. The Gallatin County Sheriff’s Office is requesting that if anyone knows who the driver might be, or is missing anyone who resembles the description please contact the Gallatin County Sheriff’s Office at (406) 582-2100 extension 2.

On 7/5/16 around 2:30 PM Gallatin County Search and Rescue was dispatched to Sourdough Canyon for a report of woman with an injured ankle. The 64 year old Bozemanite biked from Moser Creek to Sourdough Canyon with a few friends. They parked their bicycles at the “Wall of Death” trail and embarked on a side journey up the trail. While hiking, she twisted her ankle and heard a pop. One of her friends hiked out and called 911.

Sheriff’s Search and Rescue volunteers, AMR and Hyalite Fire District drove up the road about five miles to where the bikes were parked.  The woman was located a mile from there. She was carried by a GCSAR member for about a half mile and met by other members who wheeled her out using a specialized litter.

Sheriff Gootkin would like to remind backcountry enthusiasts to appreciate how a small injury can have magnified consequences in difficult to reach locations. Photo courtesy of the Sheriff’s Office. 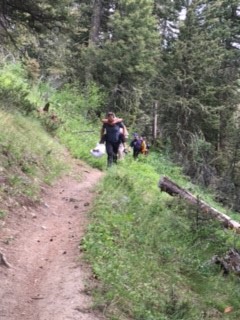 (Big Sky, Mont.) The missing hiker near Big Sky was located this afternoon about 1:15. She was in good health and transported to the hospital to be checked. Temperatures dipped into the low 40’s overnight. Sheriff Gootkin want to remind those that go hiking that even a shot hike can turn into an overnight adventure. Know the terrain, know your limitations and take a partner.

(Big Sky, Mont.) Sheriff’s Search and Rescue from Gallatin County and Yellowstone Club personnell have been searching for a 62 year old California woman since yesterday.  She left to hike the Cedar Loop Trail about noon on the 4th of July and was called into the Sheriff’s Office as overdue about 6:30.  Search teams including 2 helicopters scoured the area last night and resources are being added today including more dog teams and Madison County Search and Rescue.

​On July 1st, 2016, at approximately 1657 hours, a Montana Highway Patrol Trooper was dispatched to check the welfare of an adult male who was sitting on the guardrail, under the 7th Street overpass, on Interstate 90, westbound.  ​While conducting the welfare check, the Trooper was informed that the suspect had a $10,000.00 warrant out of Gallatin County for assault with a deadly weapon. As the Trooper attempted to restrain the suspect he pulled a knife and threatened the officers on scene, stating that he “wasn’t going back to jail”. The suspect then pointed the knife at his own chest resulting in a lengthy standoff with law enforcement officers from Gallatin County Sheriff’s Office, Montana Highway Patrol and Bozeman Police Department.

​During the standoff, both the east and westbound lanes of Interstate 90 were closed and traffic was diverted off the interstate at the 307 exit.

​The suspect eventually gave up and was arrested. He was transported to Bozeman Deaconess Hospital for evaluation.

​The incident ended without any injuries to the officers involved or the suspect.