(Bozeman) – Gallatin County Search and Rescue personnel were able to locate a pair of hunters this morning after the two spent a chilly night on the west side of the Bridger Mountains.

According to Incident Commander Deputy Mark Hernandez of the Gallatin County Sheriff’s Office, the hunters, a father and son from Park County, began their hunting trip Sunday when they hiked the Fairy Lake trailhead and over Sacajawea Peak. The two hunters were looking to fill a mountain goat tag.

After successfully killing their game, the two dressed the animal out and began packing portions of the carcass out.  Instead of traveling back over Sacajawea Peak (east), the pair attempted to hike downhill (west), toward Bozeman.  Their assumption that going downhill would be easier tuned out to be wrong.  The hike turned out to be much tougher and disorienting than they thought and when it got dark the hunters stopped, made a campfire and called their families to let them know they were lost and where they thought they were. Then their cell phone died.

Search and Rescue units were dispatched to the area after 11:00 o’clock when the families called 9-1-1.  Last night’s search was unsuccessful, but an early helicopter recon flight by searchers this morning located the hunters in Dry Canyon, about two miles east of Springhill Community Road.

Other than having to spend a long night under a goat skin, both hunters were uninjured.

“Once again we remind hunters to be prepared,” says Deputy Hernandez.  “A day trip can turn into a back country overnight stay very quickly.  We urge hunters to take extra clothing, fire-making supplies, a first aid kit, a charged cell phone, extra food and extra water.”

Hernandez adds, “When these two hunters realized they were faced with a night in the woods, they did the right thing.  They let someone know, they stayed put and they built a fire. They may have lost some sleep, we got them home safe and sound.”

The victim of the fatal motor vehicle accident that occurred on SR 205, west of Manhattan, on October 25 has been identified to be Alexander Archer, 24 years, of Manhattan, Mt. The accident is being investigated by the Montana Highway Patrol. ####

On October 23, 2011, Gallatin County Sheriff’s deputies responded to Stacey’s Bar at 300 Mill Road in Gallatin Gateway for a report of an assault that occurred early Sunday morning. A 32-year-old male was stabbed several times outside the bar. The male was transported to Bozeman Deaconess Hospital for treatment of his injuries.

The Sheriff’s Office is requesting that anyone having information regarding this incident to contact the Gallatin County Sheriff’s Office at 582-2100 #2, or Headwaters Crimestoppers tip line at 586-1131 with any information. Callers may remain anonymous and will be eligible for a cash reward.

An adult female slipped on a log and fell injuring her ankle and calf. The hiker was unable to walk. Rescuers responded to help assist the hiker down the trail.

On Saturday, October 22, 2011 at 10:07 a.m. the Gallatin County Sheriff’s Office and members of the Gallatin County Search and Rescue responded to Lick Creek Trailhead in the Hyalite area south of Bozeman for a back country rescue. A 63 year-old man was injured while elk hunting. His hunting companion flagged down a passing motorist on Hyalite Canyon road and reported his companion had fallen and possibly broken his ankle about a half-mile up the canyon from Lick Creek Trailhead. The motorist in turn contacted dispatch personnel by calling 911 on their cell phone.

Sheriff Cashell reminds hunters that even a short simple hunt in familiar territory can turn into an adventure. Always be prepared with appropriate clothing, food & water and a compass. The two hunters had personal radios which allowed the searchers to speak directly with the victim prior to rescue. Both hunters were commended for hunting as a team, having a plan and following the plan, and having appropriate equipment and clothing for their hunt.

The Gallatin County Sheriff/Coroner has identified the victim in the fatal motor vehicle accident which occurred on I-90 on October 10, 2011 as 64 year-old Carol Leroux of Boulder, MT. The accident is being ivestigated by the Montana Highway Patrol. 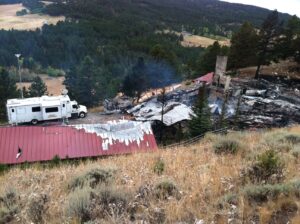